Thirty Minutes of Exercise A Day Can Keep Cancer At Bay 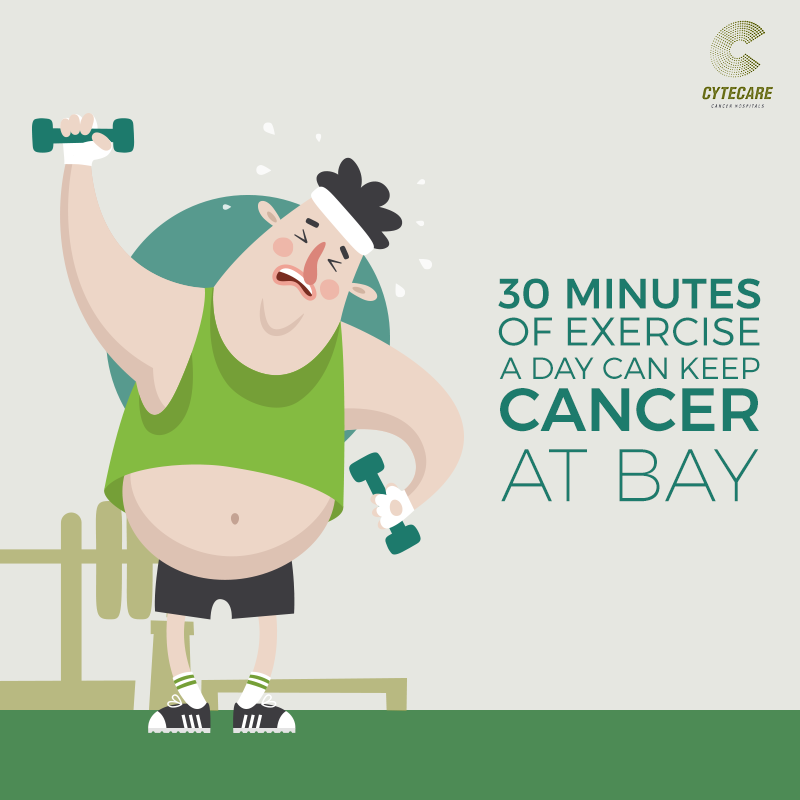 Most often “Being fit” is construed as the process of undergoing a weight loss. While maintaining normal body weight is one of the goals of fitness, it is not the only purpose. Our body’s remarkable ability to fight off diseases and repair is directly proportional to how to fit we are from with-in.  A rather dangerous lifestyle and choice of habits seem to have displaced our rationale and overpowered our lives today.  Not only are we making wrong lifestyle choices, we perhaps endorse them too. Late delivery of pizza, a broken elevator, a cyclist who slows down the traffic, the lack of discounts over carbonated drinks at a movie theatre all seems to make us angry and we seem to have a false sense of entitlement over all these. Further, a sedentary life due to our largely desk-based jobs has left us almost inactive and passive.  Chronic diseases such as diabetes, cardiovascular diseases, choric inflammation as well as cancer are known to have a positive correlation with being sedentary and physically passive.

Evolutionarily, human beings are designed for a life that involves periodic endurance activity (running) and intermittent feeding. By choosing a sedentary lifestyle, we are working against the very nature of evolution and the way our genes are encoded.  Physical endurance and activity enable the expression of “survival” genes which are responsible for expressing proteins that are protective against metabolic and oxidative stress. This property of a cell to endure oxidative stress and repair is the key to fighting cancer and several other chronic inflammatory diseases.

Obesity and physical inactivity is a cancer risk and is associated with multiple malignancies including colorectal cancer, breast cancer, oesophagal adenocarcinoma, cancers of pancreas, gallbladder, liver, kidney, endometrium, thyroid, ovarian cancer and high-grade prostate cancer. Today, obesity is a public health issue, affecting children too. Obese children are twice as likely to grow up into obese individuals increase their risk of cancer.

What does physical activity mean?

Movements that make use of skeletal muscles constitute to physical activity. In simple terms being physically active is to be on the move. One can be physically active at work (occupational) at home (household work), as an activity done to commute (transport, bikes/cycles, walking) or recreational (such as swimming, tennis, hiking, etc).

Physical activity varies in intensity ranging from light, moderate to intense.  Some of the light, moderate and intense work-outs include housework, brisk walking, sprinting respectively. vi The benefits of being physically active depend on the intensity and frequency of activity. Every individual can choose the activity that fits their routine well.  It is recommended that adults must engage in at least 150 minutes of moderate-intensity or 75 minutes of vigorous-intensity aerobic physical activity in a week. Children and adolescents must be engaged in 60 minutes of daily activity. The American Institute for Cancer Research recommends a moderate activity of 30 minutes on a daily basis to off-set the risk of cancer.

Excess body fat or obesity means an increased level of growth factors such as insulin and insulin-like growth factor (IGF-1) in the body. Fat also increases the steroid hormones such as estrogen, high levels of which are a risk factor for breast cancer. Obesity also triggers an imbalance in adipocytokines such as leptin and adiponectin which are known to play a role in growth, immunity as well as tumour regulatory functions. People with high body fat are known to have altered gut flora, which is known to play an important role in gut-immunity. Excess body fat also triggers body-wide inflammation and promotes oxidative stress. All the above are a perfect ground for cancer to begin.

A healthy body needs a healthy mind. Staying free of anxiety and stress contributes greatly toward boosting the immune system. Exercise not only strengthens the body but is also known to elevate mood in people with mild to moderate depression. A study showed that the effects of exercise stayed longer than some of the anti-depressant drugs (Sertraline). Certainly, exercise is the most underrated anti-depressant. Indulging in mild to moderate well-tolerated physical activity during cancer treatment can help the patient to cope psychologically.

Yoga and deep breathing exercises are known to reduce radiation-induced DNA damage. Yoga has been used to improve the quality of life in breast cancer patients. It has been observed that the apoptotic index (a measure of cell death or the ability of a cell to induce self-destruction) was significantly lower in non-yoga practitioners as well as breast cancer patients when compared to yoga practitioners (>10 years of practice).

Exercise has remarkable effects on human body through which several signaling pathways are moderated. There is a strong correlation between physical activity and increased immune surveillance, reduction in inflammation, increase in endogenous anti-oxidant enzymes, increased insulin sensitivity, greater control on growth factors such as Insulin, reduction in obesity and related co-morbidities. Overall controlling these factors, could facilitate a robust DNA repair mechanism as well as reduce oxidative stress, both of which when hampered lead to key molecular events resulting in cancer. Exercising has not only shown to be beneficial in preventing cancer but has also contributed to control as well as reduce recurrence in some cancers.

Some of the key outcomes studied with respect to Exercise and cancer include:

It is estimated that about 30-40% of cancers can be prevented by lifestyle and dietary changes alone.  Transitioning from a sedentary way of life to staying active, maintaining a healthy BMI or body weight are key contributors to reducing cancer risk.  Often pre-cancerous lesions transform into a malignancy over a period of time. During this latency, our physical fitness can help reverse the molecular pathways that could possible result in carcinogenesis.

The burden of cancer treatment is huge both psychologically as well as financially.  The cost of exercising is zero, while the incentives and rewards are bountiful. Adopting a healthy lifestyle with a minimum of 30 minutes of exercise routine into daily life can be one of the best cancer prevention strategies.

There are many questions such as, are there any biomarkers for cancer risk which are affected by physical activity? Will the physical activity be able to off-set hereditary cancer? And lastly, though there is a huge correlation between being physically active and reducing the risk of cancer, can cancer be prevented? Several studies are ongoing to answer these questions. Nevertheless, it is undeniable and experiential that exercise brings about a feel-good factor and will definitely have a positive influence. A good enough reason to start exercising now!

Does Gallbladder Cancer Have A Gender Bias