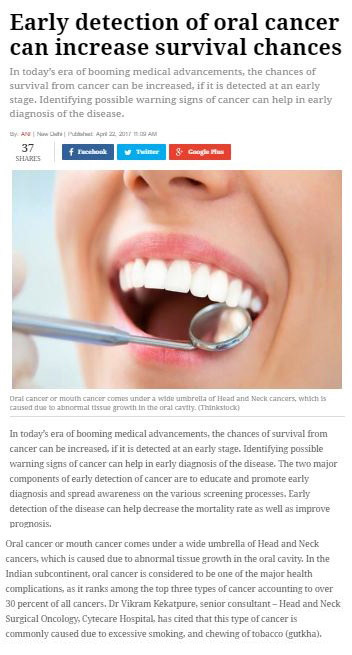 In today’s era of booming medical advancements, the chances of survival from cancer can be increased, if it is detected at an early stage. Identifying possible warning signs of cancer can help in early diagnosis of the disease. The two major components of early detection of cancer are to educate and promote early diagnosis and spread awareness on the various screening processes. Early detection of the disease can help decrease the mortality rate as well as improve prognosis.

Oral cancer or mouth cancer comes under a wide umbrella of Head and Neck cancers, which is caused due to abnormal tissue growth in the oral cavity. In the Indian subcontinent, oral cancer is considered to be one of the major health complications, as it ranks among the top three types of cancer accounting to over 30 percent of all cancers. Dr. Vikram Kekatpure, senior consultant – Head and Neck Surgical Oncology, Cytecare Hospital, has cited that this type of cancer is commonly caused due to excessive smoking, and chewing of tobacco (gutkha).

Alcohol consumption, poor oral hygiene and ill-fitting dentures add risk factors. Oral cancer in India is seen in both, men and women. This is a common disease in both the genders as now both, men, as well as women, are induced to tobacco addiction. He further identifies the primary symptoms of oral cancer can be identified when one notices red or white patches in the mouth cavity, i.e., tongue, gums or at the side of the mouth. Ulcers that do not get cured within three weeks should not be ignored since they could be early signs of oral cancer. On detecting these patches or ulcers, one must visit a dentist or a surgeon for immediate consultation. The other reason for increasing deaths caused by oral cancer in India is late detection.

Oral cancer, if detected at an initial stage, has good chances to get cured. The problem in India is that people ignore the early signs of cancer and they only consult a doctor when the cancer has reached the third or the fourth stage. Dr. Kekatpure adds treating any cancer in their latter stages can be extremely difficult. It is seen that people from the lower socio-economic strata are exposed to oral cancer more, because of their tobacco chewing habits.

To avoid these complications, dentists or health workers must conduct screening programs at a community level, especially in small towns and rural areas where tobacco users are high in numbers. These screening programs will help spread awareness among people in tier two and tier three cities and towns. Oral Cancer treatment is a social and economic burden in India, especially for individuals who belong to the lower economic strata. Treatments of earlier detected cancer have a less economic burden and have more chances of long term survival.

In stages one and two, most oral cancer patients are successfully treated with surgery alone however in stages three and four a combination treatment with surgery followed by radiation and chemotherapy may be required. Hence, early detection of oral cancer results in positive healing of the disease. We need to create awareness regarding harmful effects of tobacco consumption and help citizens become more conscious of the advantages of early detection to avoid harmful consequences in the future.