Growing antibiotic resistance cause for concern 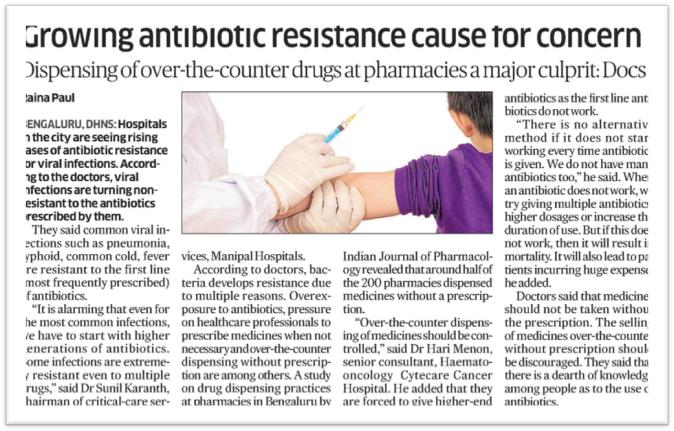 Dispensing of over-the-counter drugs at pharmacies a major culprit: Docs

Hospitals in the city are seeing rising cases of antibiotic resistance for viral infections.

According to doctors, viral infections are turning non-resistant to the antibiotics prescribed by them.

They said common viral infections such as pneumonia, typhoid, common cold, fever are resistant to the first line (most frequently prescribed) of antibiotics.

“It is alarming that even for the most common infections, we have to start with higher generations of antibiotics. Some infections are extremely resistant even to multiple drugs,” said Dr. Sunil Karanth, chairman of critical-care services, Manipal Hospitals.

According to doctors, bacteria develop resistance due to multiple reasons. Overexposure to antibiotics, pressure on healthcare professionals to prescribe medicines when not necessary and over-the-counter dispensing without prescription are among others. A study on drug dispensing practices at pharmacies in Bengaluru by Indian Journal of Pharmacology revealed that around half of the 200 pharmacies dispensed medicines without a prescription.

“Over-the-counter dispensing of medicines should be controlled,” said Dr. Hari Menon, senior consultant, Haemato-oncology Cytecare Cancer Hospital. He added that they are forced to give higher-end antibiotics as the first line antibiotics do not work.

“There is no alternative method if it does not start working every time antibiotics are given. We do not have many antibiotics too,” he said. When an antibiotic does not work, we try giving multiple antibiotics, higher dosages or increase the duration of use. But if this does not work, then it will result in mortality. It will also lead to patients incurring a huge expense, he added.

Doctors said that medicines should not be taken without the prescription. The selling of medicines over-the-counter without prescription should be discouraged. They said that there is a dearth of knowledge among people as to the use of antibiotics.