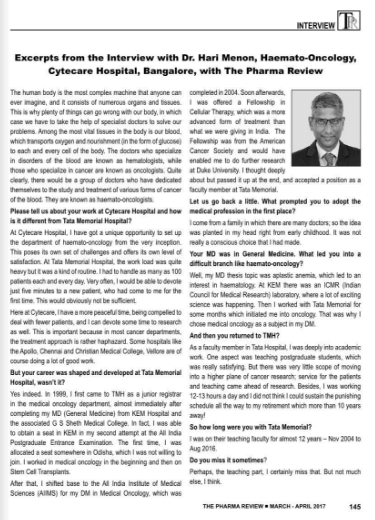 The human body is the most complex machine that anyone can ever imagine, and it consists of numerous organs and tissues. This is why plenty of things can go wrong with our body, in which case we have to take the help of specialist doctors to solve our problems.

Among the most vital tissues in the body is our blood, which transports oxygen and nourishment (in the form of glucose) to each and every cell of the body. The doctors who specialize in disorders of the blood are known as hematologists, while those who specialize in cancer are known as oncologists. Quite clearly, there would be a group of doctors who have dedicated themselves to the study and treatment of various forms of cancer of the blood. They are known as haemato-oncologists.

Pharma Review got together with Dr. Hari Menon, Senior Consultant, Haemato-oncology, Cytecare Hospital, Bangalore, to understand what led to adopt this as a profession. Excerpts from the interview:

Please tell us about your work at Cytecare Hospital and how is it different from Tata Memorial Hospital?

At Cytecare Hospital, I have got a unique opportunity to set up the department of haemato-oncology from the very inception. This poses its own set of challenges and offers its own level of satisfaction. At Tata Memorial Hospital, the work load was quite heavy but it was a kind of routine. I had to handle as many as 100 patients each and every day. Very often, I would be able to devote just five minutes to a new patient, who had come to me for the first time. This would obviously not be sufficient.

Here at Cytecare, I have a more peaceful time, being compelled to deal with fewer patients, and I can devote some time to research as well. This is important because in most cancer departments, the treatment approach is rather haphazard. Some hospitals like the Apollo, Chennai and Christian Medical College, Vellore are of course doing a lot of good work.

But your career was shaped and developed at Tata Memorial Hospital, wasn’t it?

Yes indeed. In 1999, I first came to TMH as a junior registrar in the medical oncology department, almost immediately after completing my MD (General Medicine) from KEM Hospital and the associated G S Sheth Medical College. In fact, I was able to obtain a seat in KEM in my second attempt at the All India Postgraduate Entrance Examination. The first time, I was allocated a seat somewhere in Odisha, which I was not willing to join. I worked in medical oncology in the beginning and then on Stem Cell Transplants.

After that, I shifted base to the All India Institute of Medical Sciences (AIIMS) for my DM in Medical Oncology, which was completed in 2004. Soon afterwards, I was offered a Fellowship in Cellular Therapy, which was a more advanced form of treatment than what we were giving in India.  The Fellowship was from the American Cancer Society and would have enabled me to do further research at Duke University. I thought deeply about but passed it up at the end, and accepted a position as a faculty member at Tata Memorial.

Let us go back a little. What prompted you to adopt the medical profession in the first place?

I come from a family in which there are many doctors; so the idea was planted in my head right from early childhood. It was not really a conscious choice that I had made.

Your MD was in General Medicine. What led you into a difficult branch like haemato-oncology?

Well, my MD thesis topic was aplastic anemia, which led to an interest in haematology. At KEM there was an ICMR (Indian Council for Medical Research) laboratory, where a lot of exciting science was happening. Then I worked with Tata Memorial for some months which initiated me into oncology. That was why I chose medical oncology as a subject in my DM.

And then you returned to TMH?

As a faculty member in Tata Hospital, I was deeply into academic work. One aspect was teaching postgraduate students, which was really satisfying. But there was very little scope of moving into a higher plane of cancer research; service for the patients and teaching came ahead of research. Besides, I was working 12-13 hours a day and I did not think I could sustain the punishing schedule all the way to my retirement which more than 10 years away!

So how long were you with Tata Memorial?

Do you miss it sometimes?

Perhaps, the teaching part, I certainly miss that. But not much else, I think.