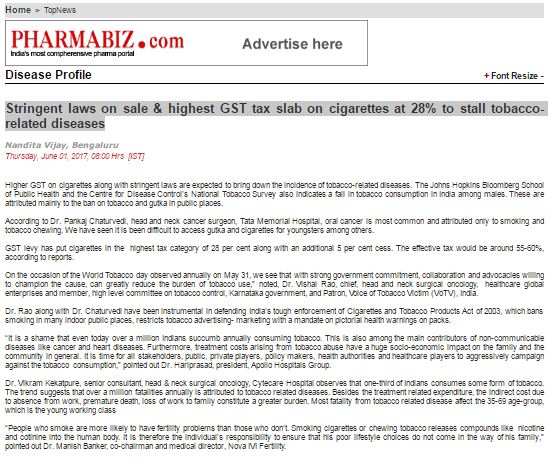 Higher GST on cigarettes along with stringent laws is expected to bring down the incidence of tobacco-related diseases. The Johns Hopkins Bloomberg School of Public Health and the Centre for Disease Control’s National Tobacco Survey also indicates a fall in tobacco consumption in India among males. These are attributed mainly to the ban on tobacco and gutka in public places.

According to Dr. Pankaj Chaturvedi, head and neck cancer surgeon, Tata Memorial Hospital, oral cancer is most common and attributed only to smoking and tobacco chewing. We have seen it is been difficult to access gutka and cigarettes for youngsters among others.

GST levy has put cigarettes in the highest tax category of 28 percent along with an additional 5 percent cess. The effective tax would be around 55-60%, according to reports.

On the occasion of the World Tobacco day observed annually on May 31, we see that with strong government commitment, collaboration and advocacies willing to champion the cause, can greatly reduce the burden of tobacco use,” noted, Dr. Vishal Rao, chief, head and neck surgical oncology,  healthcare global enterprises and member, high level committee on tobacco control, Karnataka government, and Patron, Voice of Tobacco Victim (VoTV), India.

Dr. Rao along with Dr. Chaturvedi has been instrumental in defending India’s tough enforcement of Cigarettes and Tobacco Products Act of 2003, which bans smoking in many indoor public places, restricts tobacco advertising- marketing with a mandate on pictorial health warnings on packs.

“It is a shame that even today over a million Indians succumb annually consuming tobacco. This is also among the main contributors to non-communicable diseases like cancer and heart diseases. Furthermore, treatment costs arising from tobacco abuse have a huge socio-economic impact on the family and the community in general. It is time for all stakeholders, public, private players, policymakers, health authorities and healthcare players to aggressively campaign against the tobacco consumption,” pointed out Dr. Hariprasad, President, Apollo Hospitals Group.

Dr. Vikram Kekatpure, senior consultant, head & neck surgical oncology, Cytecare Hospital observes that one-third of Indians consumes some form of tobacco. The trend suggests that over a million fatalities annually are attributed to tobacco-related diseases. Besides the treatment-related expenditure, the indirect cost due to absence from work, premature death, loss of work to family constitute a greater burden. Most fatalities from tobacco-related disease affect the 35-69 age-group, which is the young working class

“People who smoke are more likely to have fertility problems than those who don’t. Smoking cigarettes or chewing tobacco releases compounds like nicotine and cotinine into the human body. It is, therefore, the individual’s responsibility to ensure that his poor lifestyle choices do not come in the way of his family,” pointed out Dr. Manish Banker, co-chairman and medical director, Nova IVI Fertility.