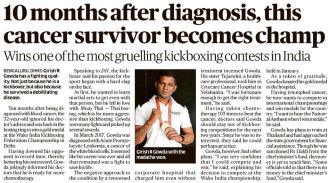 Girish R Gowda has a fighting quality. Not just because he is a kickboxer, but also because he survived a debilitating disease.

Ten months after being diagnosed with blood cancer, the 32-year-old ignored his doctor’s advice and was back in the boxing ring to win a gold medal at the Wako India Kickboxing Federation Championship in Delhi.

Having downed his opponent in record time, thereby bettering his own record, Gowda jokingly informed his doctors that he is ready for more chemotherapy.

Speaking to DH, the kickboxer said his passion for the sport began with a hard slap on the face.

At first, he wanted to learn martial arts to get even with that person, but he fell in love with Muay Thai – Thai boxing, which is far more aggressive than kickboxing. Gowda won many fights and picked up several awards.

In March 2017, Gowda was diagnosed with Acute Promyelocytic Leukemia, a cancer of the white blood cells. It seemed like his career was over and all that remained was a fight to save his life.

The negative approach to the condition by a renowned corporate hospital that charged him even without treatment incensed Gowda. His sister Tejaswini, a healthcare professional, took him to Cytecare Cancer Hospital in Yelahanka. “I was fortunate enough to get the right treatment,” he said.

Having taken chemotherapy 103 times to beat the cancer, doctors said Gowda should stay out of kickboxing competitions for the next two years. Since he was so interested, they said he could perhaps practice.

Gowda, however, had other plans. “I was very confident that I could compete and win,” he said, explaining his decision to compete at the Wako India championship, held in January.

As a token of gratitude, Gowda donated his gold medal to the hospital.

Having triumphed cancer, he now wants to compete in international championships and win medals for the country. “I want to hear the National Anthem when I win medals,” he said.