There is a dearth of qualified oncologists in the country: Dr. Hari Menon 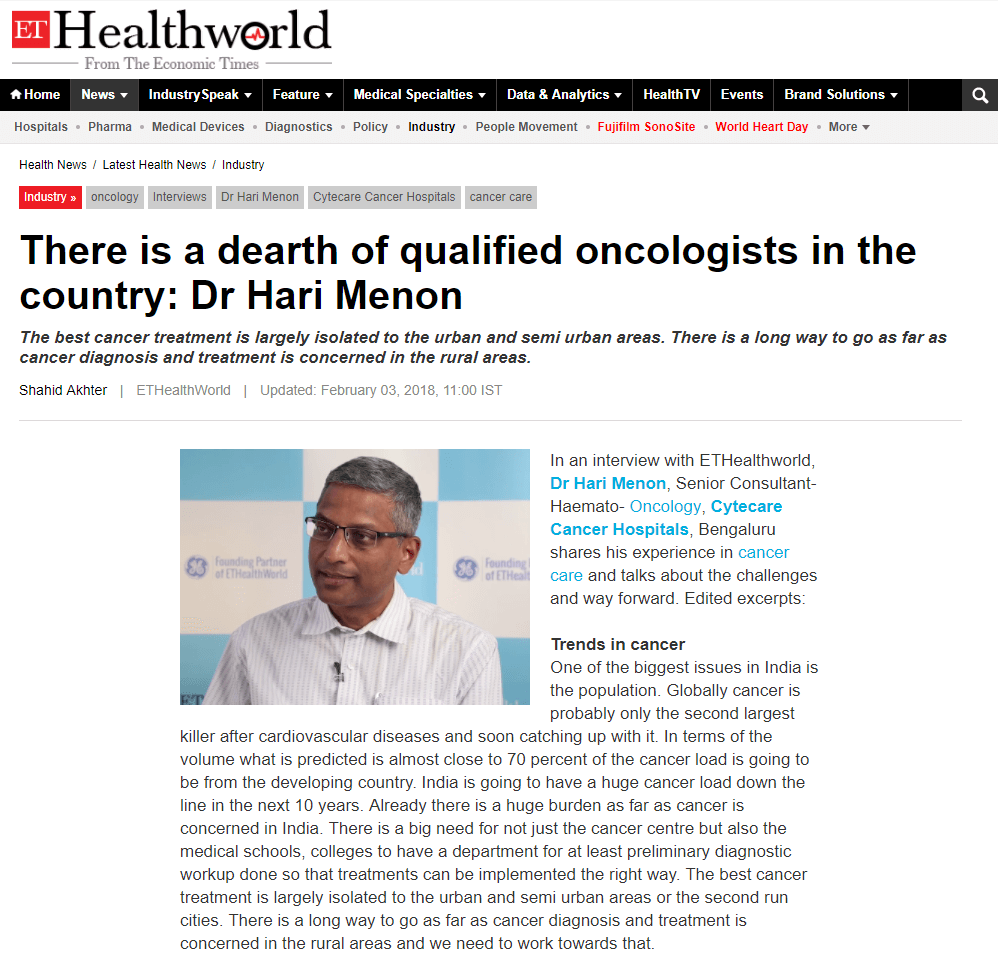 The best cancer treatment is largely isolated to the urban and semi urban areas. There is a long way to go as far as cancer diagnosis and treatment is concerned in the rural areas.

One of the biggest issues in India is the population. Globally cancer is probably only the second largest killer after cardiovascular diseases and soon catching up with it. In terms of the volume what is predicted is almost close to 70 percent of the cancer load is going to be from the developing country. India is going to have a huge cancer load down the line in the next 10 years. Already there is a huge burden as far as cancer is concerned in India. There is a big need for not just the cancer centre but also the medical schools, colleges to have a department for at least preliminary diagnostic workup done so that treatments can be implemented the right way. The best cancer treatment is largely isolated to the urban and semi urban areas or the second run cities. There is a long way to go as far as cancer diagnosis and treatment is concerned in the rural areas and we need to work towards that.

What we see in the public is that many of the awareness is related to personal events that have happened to them following which people have taken up the cause for cancer and many of the cancer care is restricted to one of the centres of eminence. Though, as an oncologist in the field from the past 20 years, I would accept that the scenario has improved significantly with many more hospitals offering cancer care as dedicated services in the department but still there is long way to go as far as providing cancer care to be available for anyone who deserves the treatment.

The quality of care is again patchy because of the dearth of qualified oncologist in the country. This is again improving with many centres offering the courses. We are having more number of medical oncologist but what happens is that many people in the past have learnt on the job and perhaps that is not the best way to go about. Retraining has to happen as far as the knowledge of oncology is concerned, there are also changes happening in oncology and it is probably one of the sciences which is developing with several new innovations coming as far as treatment is concerned. One has to be updated about it and there is also an importance to know what to do and more so what not to do in a cancer patient. We have to look at it from several perspectives, one is to understand who are the patients that need treatment? Who are the patients whom you can control well? and also recognise where you can’t do something. You can at least avoid unnecessary treatment and investigations for the patients that comes only though some sort of experience. I would agree with some of the rules and regulations that have come with the medical council where it becomes mandatory for doctors to have attended CMEs and gain credit points in their subject to keep their licences valid.

What attracted me to Cytecare Hospitals was that there was a provision for us to develop verticals over here and be dedicated to a particular cancer field so that we can improve upon that. We know that it worked very well in my previous centre which was Tata Memorial Hospital, where there was a need to develop verticals and dedicated diseases, which naturally allowed patients into protocol based therapies, uniform therapies, so that you also had an opportunity to understand how they do well in the prevailing circumstances in India because many times you take a protocol that are present in the west and translate it directly into the Indian population which may not be working to well. So we can make those adjustments if you have protocol based therapies.

We have started developing a framework to have clinical research brought in. There are two forms of clinical research, one is the industry driven where there are a lot of molecules which are coming up. Also, wherein you participate in those clinical research so that we can be part of a drug development. Another aspect is investigating an initiated research which will take some time because you need to have all the people involved in that to becoming on the same page. I hope to see that coming and we will at least be in a position to start off some investigative initiative studies.