Tobacco: Threat to World No Tobacco Day: What Indian doctors have to say about tobacco smoking 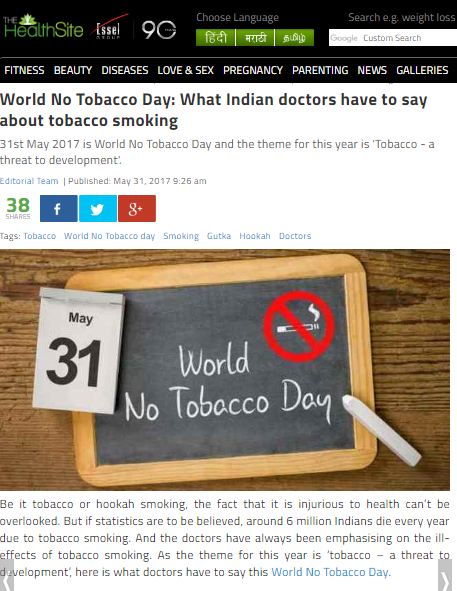 Be it tobacco or hookah smoking, the fact that it is injurious to health can’t be overlooked. But if statistics are to be believed, around 6 million Indians die every year due to tobacco smoking. And the doctors have always been emphasising on the ill-effects of tobacco smoking. As the theme for this year is ‘tobacco – a threat to development’, here is what doctors have to say this World No Tobacco Day.

Dr Rajesh Chawla, Senior Consultant, Respiratory and Critical Care, Indraprastha Apollo Hospitals, Delhi: “Lung cancer has gone up by 600 times since 1950 and factors like air pollution and smoking have played a major role in deteriorating the health of our lungs. People and especially, the younger generation who is giving in to tobacco consumption majorly due to peer pressure need to understand the consequences of smoking. To address a few, tobacco consumption not only increases the risk of early cataract, ageing and wrinkles but in 20%-30% cases, newborns weigh much less than the normal healthy weight. From hair to toenail, every single cell of the body gets affected by it. The chances of getting a heart attack increase twice as that of cancer and it becomes even harder to control diabetes and the risk of a cardiac arrest gets 14 times higher for people who are diabetic and smokers at the same time.”

“Today, tobacco consumption has become one of the leading causes of death. People who think that smoking bidi is an alternative and safer than cigarettes, then they need to understand that it is equally harmful. Smoking itself causes around 6 million deaths in a year and almost 6 lac people are affected by passive smoking. The study says that passive smokers are at a greater risk than the ones who actually smoke cigarettes and bidis.” “By 2030, 80% of all the tobacco deaths are going to happen in the developing countries. We being the fourth largest producer of tobacco in the world, produce and consume an unimaginable number of about 4 crore cigarettes, 8 crore bidis and almost 6 crore chewable form of tobacco. While tobacco consumption is decreasing in the developed countries, it is increasing at an alarming rate in the developing nations.”

Dr SK Gupta, Senior Consultant, Cardiology, Indraprastha Apollo Hospitals, Delhi: “Tobacco is the worst addiction. Tobacco killed 6.4 million people in 2015, accounting for 11.4% of global deaths. It’s the second biggest contributor to early death and disability*. Tobacco increases the risk of developing blood pressure and cardiovascular diseases, which includes coronary heart disease and stroke. Tobacco also increases the risk of developing oral cancer like mouth or throat depends on the duration and frequency of tobacco use. Quitting smoking requires strong determination, one should make a date to give up – and stick to it! Throw away all your tobacco, lighters and ashtrays. Try to change your routine and avoid smoke promoting triggers.”

Dr Praveen Garg, Senior Consultant, Oncology, Indraprastha Apollo Hospitals, Delhi: “Tobacco and alcohol are the most important oral cancer risk factors. Other health risks of chewing tobacco include gum disease, tooth decay and tooth loss, and possible links to other cancers and cardiovascular disease. Mouth cancer is largely a lifestyle disease, meaning that the majority of cases are related to tobacco and alcohol use. In the early stages, mouth cancer rarely causes any pain. Abnormal cell growth usually appears as flat patches. Approximately 90% of people with mouth cancer are tobacco users.”

Ms Lalitha Subramanyam, Chief Nutritionist at Grow Fit: “There is a link between quitting smoking and weight gain. This is mainly due to the nicotine that raises the body’s metabolic rate. In fact, a heavy smoker tends to burn as many as 200 extra calories a day. Also, quitting smoking enhances a person’s ability to taste and smell and this encourages binge eating. Thus, changes in diet and lifestyle such as inculcating exercise in your daily routine, relaxation techniques like yoga and meditation to reduce stress and anxiety and drinking a lot of water are some of the ways that can help you quit smoking without gaining weight.”

Dr M Udaya Kumar Maiya, Medical Director, Portea Medical: “Tobacco consumption in any form, be it cigarettes, beedi, ghutka, pan, khaini, sheesha, or even e-cigarettes can have detrimental effects on your health. There are many serious health conditions associated with continuous smoking and other forms of tobacco usage. While Cancer is by far the most prevalent side effects of tobacco consumption globally, diseases such as COPD or chronic obstructive pulmonary disease, Type II Diabetes, Fractures, Premature births or stillbirths and Arthritis are also caused by tobacco usage. The need of the hour is to sensitise people and create awareness at the household level.” (Read: 25 things that happen inside your body when you smoke)

Dr Manoj Kumar, Associate Director & Head – Cardiac Cath Lab, Max Super Specialty Hospital, Patparganj, New Delhi: “Smokeless tobacco and sheesha affect the heart in multiple ways. The high levels of carbon monoxide which go inside the body reduce the oxygen-carrying capacity of the blood, leading to an overall drop in the amount of oxygen circulating in the body. Thus, the heart rate and blood pressure increase drastically leading to a lot of exertion on the cardiovascular system. People addicted to such forms of tobacco are more prone to the risk of cardiac arrests, elevated blood pressure levels, strokes, haemorrhages, blood clots, and other heart-related ailments. People with a risk of cardiac ailments or a history of cardiac arrest have twice the risk of mortality if they continue the usage of snuff or other smokeless tobacco products even after an attack.”

Dr Santosh Kumar Agarwal, Senior Interventional Cardiologist, Kailash Hospital and Heart Institute, Noida: “All forms of tobacco are dangerous to smokers and non-smokers alike. The nicotine in tobacco is what makes people addicted to it. Whether it is smoking or chewing, tobacco damages blood vessels, temporarily raises blood pressure, and lowers exercise tolerance. It also reduces the oxygen-carrying capacity of blood and increases the tendency for blood to clot. Blood clots in the arteries can further cause a range of heart problems, which ultimately result in a stroke or sudden death.”

Dr Hrishikesh D Pai, Medical Director, Bloom IVF Group & Secretary General of the Federation of Obstetrics and Gynaecological Societies of India: “Tobacco contains a wide range of carcinogens which interfere with the reproductive system of both men and women leading to issues like infertility, low sperm count, ovulation problems, damage to the reproductive system, cancer, and premature menopause. It also causes genetic mutations and increases the risk of miscarriages and still birth. Apart from all these, it has also been observed that an active tobacco user finds it more difficult to conceive even with the help of fertility treatments. Tobacco consumption not only has an adverse effect on conception but also causes irreparable damages and even death of the foetus and must be avoided at all costs when one is trying to get pregnant or is pregnant.”

Dr Sanjay Kalra, Consultant Endocrinologist, Bharti Hospital Karnal & Vice President, South Asian Federation of Endocrine Societies: “Betel quid has been ranked the fourth most popular psychoactive substance globally. While traditionally it is believed to be a remedy for many health complaints including digestive ailments, a group of compounds called alkaloids in it are responsible for adrenaline stimulating and vasoconstricting (narrowing the blood vessels) effects. The main chemical called arecoline can harm the central nervous system. Besides being associated with many types of oral cancers, this infamous substance has also been found to adversely affect the endocrine system leading to Type II diabetes, obesity, and infertility. Ingredients in betel nut can interact with other drugs, medicinal supplements, and herbal infusions as well, rendering them ineffective and leading to toxic reactions in the body.”

Dr Vikram Kekatpure, Senior Consultant, Head & Neck Surgical Oncology, Cytecare Hospital: “One-third of the Indian population consumes some or other form of tobacco. Given that we are a populous crossing 1.3 billion strength, the number of tobacco users exceeds the total population of US. The trend suggests that more than a million deaths annually can be attributed to tobacco related diseases in India. There exists a strong global and national evidence linking tobacco to cardiovascular diseases, chronic obstructive pulmonary disease, and cancer. There is a significant economic burden due to resources invested in healthcare to treat tobacco-related diseases. Besides the treatment related expenditure, the indirect cost due to loss of function, absence from work, premature death loss of work to family member constitute a greater burden. Highlighting the fact, that most of the deaths caused by tobacco-related disease are of the individuals aged between 35-69 year, which is the young working class of the nation. Additionally, it is worrying to note that teenage still remains the common age for initiation into this habit. At an age when they should be enjoying their college days, exploring the world, they spend a large part of their pocket money on this deadly substance. it is extremely disturbing to see so many young lives being wasted As the policy maker take necessary steps to control tobacco use, Indian society should completely get rid of this social evil which is a threat to development.”