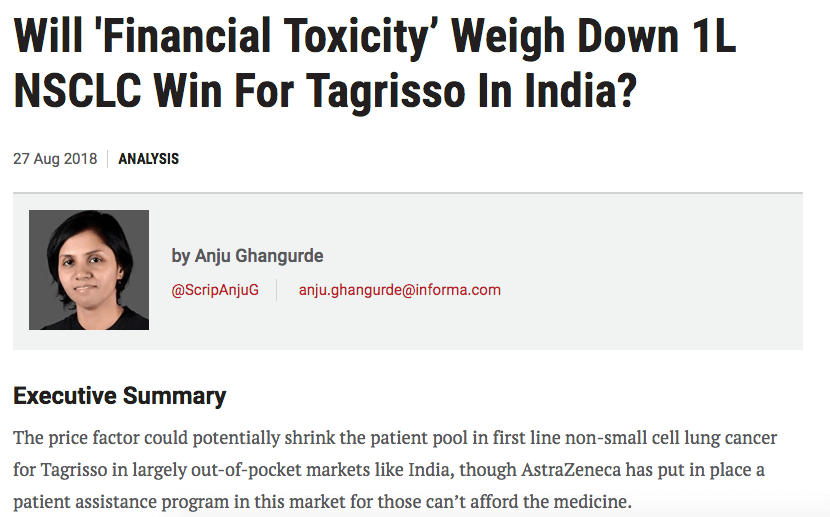 The price factor could potentially shrink the patient pool in first line non-small cell lung cancer for Tagrisso in largely out-of-pocket markets like India, though AstraZeneca has put in place a patient assistance program in this market for those can’t afford the medicine.

AstraZeneca PLC has recently received the go ahead in India for Tagrisso (osimertinib) as a first-line treatment for EGFR mutated advanced non-small cell lung cancer (NSCLC), expanding treatment options in the segment, though the affordability of the therapy in this largely self-pay market could pose challenges.

Targrisso is already approved in India for the treatment of patients with metastatic EGFR T790M mutation‐positive NSCLC, whose disease has progressed on or after EGFR tyrosine kinase inhibitor (TKI) therapy.

Pricing details on some prominent online pharmacies in the country suggest that Tagrisso 80mg is currently available at around INR490,846 ($6,998) for 30 tablets in India, raising questions around the patient pool that may be able to afford the therapy, though the local prices are believed to be at a significant discount to those in the US.

AstraZeneca gave no specifics on the India pricing of Tagrisso, but said that it prices its medicines based on the “magnitude” of innovative scientific advancement, the “value” it brings to patients and society, the development program “depth”, and the local health infrastructure and economic context.

“In India, AstraZeneca is committed to have price points and patient assistance programs that take into consideration the affordability factor for Indian patients. For Tagrisso, we have a patient assistance program (PAP) to help patients who cannot afford the medicine and are not reimbursed,” the company told Scrip. However, specifics around the PAP were not immediately clear.

Salil Kallianpur, a former EVP at GlaxoSmithKline PLC in India, now running a digital health consultancy, said that multinational companies “struggle to balance” the high cost of these medicines, which they have “no choice” but to launch at those price points due to “pressure” from the parent organizations and the need to get as many patients out of the identified target pool as possible.

“PAPs are meant to provide some ‘additional value’ to patients who would naturally balk at these prices. These programs also allow doctors to convince their patients that they get ‘more than just a pill’ when they agree to pay those prices,” Kallianpur told Scrip.

The significant value of osimertinib to the NSCLC treatment armament notwithstanding, experts indicated that affordability is a key concern in emerging markets like India.

Dr. Prasad Narayanan, senior consultant, medical oncology, Cytecare Cancer Hospital, said that while osimertinib is definitely the “best option” in EGFR mutant patients, there will be a “large percentage” of patients who continue on the other available medication “mainly due to financial reasons”.

“Financial toxicity is the most difficult one when we deal with such medications,” Narayanan told Scrip.

AstraZeneca did not directly comment on efforts to potentially transition first-line EGFR mutation-positive patients from products like Iressa (gefitinib) to Tagrisso in India and only said that the company has a “deep-rooted heritage” in oncology and offers a quickly-growing portfolio of new medicines that has the potential to transform patients’ lives and change the standard of care.

“Tagrisso provides an effective and alternate treatment solution with median progression-free survival of 18.9 months,” it said. In addition, osimertinib as a second-line treatment has been “well-received” by physicians in India as it addresses an unmet need in NSCLC treatment.

Dr. Nandu Gattu, senior vice-president pharma analytics at Excelra, a biopharma data and analytics company, noted that osimertinib is significantly more expensive (estimated at three-10 times) than the first- and second-generation EGFR inhibitors and this may play as a key factor in clinical use.

“In general, a small fraction of the population is insured and patients will have to cover their own treatment cost. This will certainly limit the use of this drug to patient group who can afford it. Collectively, this may impede access to osimertinib in NSCLC patients in India,” Gattu told Scrip.

Tagrisso has been approved in several markets including the US, Japan and Europe for the first-line treatment of patients with metastatic EGFRm NSCLC. About 10-15% of NSCLC patients in the US and Europe and 30-40% of patients in Asia have this form of the disease.

Japan Approval Another Boost For Tagrisso in 1L NSCLC

Following a priority review, Japan has approved AstraZeneca’s Tagrisso for the first-line treatment of inoperable or recurrent EGFR mutation-positive NSCLC, further strengthening the drug’s position in this setting.

Some health activists claim that at times physicians may simply not inform some patients about pricey newer treatment options, knowing full well that they would likely be unable to afford them.

Kallianpur of the digital health consultancy, however, explained that while affordability is definitely a very important part of the physician’s decision to recommend new drugs to patients, when “really good new treatments” are available, doctors do try their level best to ensure some sort of financial scheme to help patients get those medicines.

“Companies therefore offer schemes like EMIs [equated monthly installment], zero interest loans etc that are meant to help these kinds of patients. Free samples are also judiciously used, but those are just one-two doses of a medicine that needs many more such doses – those have to be purchased. The Gleevec [imatinib] PAP  that Novartis had offered [in India] actually gave the medicine free to anyone who needed it but couldn’t afford it,” Kallianpur explained. (Also see “Pharma’s Experiment With India’s Borrow And Treat Model” – Scrip, 23 Dec, 2015.)

He also added that multinational firms typically do not have “very high expectations” of sales of such novel but high priced products in India, but the “sheer numbers” projected in the targeted patient pool are sometimes too good to ignore.

“MNCs clearly expect to sell only to the high income patient groups. As newer molecules get more personalized, the patient pool decreases and in light of other factors such as weak IPR [intellectual property rights protection], low affordability and price pressures, MNCs sometimes choose not to launch those products in India as the business cases do not seem economically viable. This is one of the reasons that of all the new oncology drugs launched globally, only 7% are launched in India.”

Nevertheless, Tagrisso’s approval in first-line treatment is seen as an exciting advance in bringing a potential new standard of care to patients with EGFRm advanced NSCLC in the country. Lung cancer is the leading cause of cancer-related deaths in India.

“In spite of therapeutic advances, the overall five-year survival rate of lung cancer is dismal at <5% in India. Clinical data suggests early and sustained benefit with osimertinib in first line treatment that has the potential to significantly impact long-term patient outcomes and help address the considerable unmet need that remains in the treatment of lung cancer,” AstraZeneca Pharma India Ltd. managing director, Gagan Singh Bedi, said.

The company also said that it has been pioneering access to T790M mutation testing in India through interventions in infrastructure, scientific knowledge dissemination to medical and pathological experts and standardization of test quality through independent External Quality Assurance (EQA) programs. T790M mutation status is critical for the identification of patients who will benefit from osimertinib.

With reference to the on-ground situation in India in terms of awareness and access to T790M testing so that the right patients receive Tagrisso, Cytecare’s Narayanan said: “It’s done in all patients whenever possible”.

Excelra’s Gattu noted that in India, awareness and application of molecular testing is improving with around 80% of medical oncologists currently opting for biomarker testing at primary biopsy.

“The current oncology practice of utilizing the right marker for the right therapy is heading in the positive direction,” he added.