A Tale of Mistaken Identity – Giant Cell Tumor of Bone 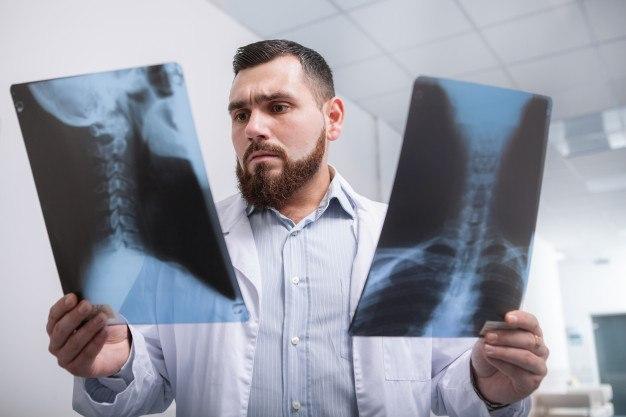 This young man with a gleaming smile hailed from the city of joy, Kolkata. As a devotee of Lord Krishna, he dedicated himself to the direct service of the Lord as a cook in one of the renowned temples of India. He had taken this major decision of life at the tender age of 17. He also had a family and was the sole breadwinner for them.

Bad luck knocked at his door in the form of slight neck pain, followed by progressive weakness of the most crucial limb, which was his right arm. Starting as just a mild issue, he could ignore the symptoms only for three months. When he approached Medical help, he was asked to undergo an MRI scan of the neck. To his shock, he was found to have a disease in the cervical vertebrae (a portion of the backbone extending into the neck).

The cervical vertebrae consist of seven separate bones, each one in the form a ring with a slightly bulkier front portion (termed as “body “of the vertebra) and an elongated process at its backside (termed as “spinous process” of the vertebra). The spinal cord runs inside its central hollow portion. In addition to aiding the neck movements, cervical vertebrae also provide physical protective coverage to the spinal cord. So, any disease that affects them can result in the restricted movements of the neck and also can cause injury to the spinal cord. This spinal cord carries many bundles of nerves transmitting signals to and fro between the brain and rest of the body. Hence, the patient can experience weakness of any of the limbs. If left unaddressed, it has full potential to cause paralysis of all the four limbs.

To know exactly what disease has got seeded into the vertebra and to relieve the compression of the spinal cord, he was given the option of surgical exploration at a medical centre. Understanding the crucial situation, he immediately underwent surgery without a second thought. This procedure relieved the compression of the spinal cord and some sample from the affected bone was obtained. This tissue sample was sent to a pathologist. Within a span of 4 days, the lab report came up showing that the features were suggestive of tuberculosis of the spine.

Our country still bears the highest burden of Tuberculosis in the world. Although skeletal involvement is nearly 1-2% of all cases, vertebrae are the commonest bone to be affected. So, like in any proven case of Skeletal TB, this man was put on anti Tubercular drugs. After completion of 3 months of the prescribed medicines, the symptoms only increased with the right limb completely affected, and mild weakness in the rest of the three limbs too had started setting in. Distraught with his health condition, he went back to his treating Doctor, this time at a tertiary centre. The attending  Neurosurgeon suspicious of the diagnosis asked for a review of the original tissue sample (which usually gets preserved in the form of blocks or slides and is given to the patient).

For bad or for good, the review showed up a new diagnosis. An entity called Giant cell tumour of the bone was identified, and the diagnosis of TB was completely ruled out. The Giant cell tumour, though, may sound very aggressive is supposed to be a benign tumour of the bone. It is known for its recurrences at the site of origin but doesn’t spread frequently as in cases of malignant diseases. The most effective treatment for this is surgical based, which could not be attempted for the second time in this patient. With very little hopes and also because no other treatment options were available, he was treated with 25 sittings of Radiotherapy. To our surprise, he improved during radiation itself. The one who came on a wheelchair assisted by his younger brother and two more hospital staff to be positioned for the radiation gradually could walk with just one person’s assistance towards the end of radiation. And within 2 months of RT completion, his limbs were fully functional.

When enquired last, which was two years post-radiotherapy, he says that he is a happy man. On being specifically asked which work did he miss the most while he was ill, he mentions the service which he offered at the temple. With 19 other staff, they have an arduous task of cooking food for over 2000 – 15,000 devotees per day. Their shift starts early in the morning at 3 am and ends by 1 pm. And he along with his team does it effortlessly. We wish him a very blessed and healthy life!