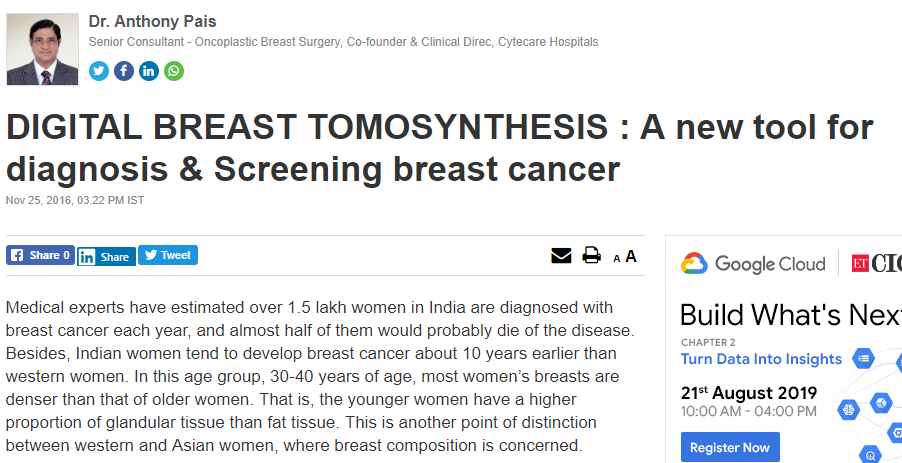 Medical experts have estimated over 1.5 lakh women in India are diagnosed with breast cancer each year, and almost half of them would probably die of the disease. Besides, Indian women tend to develop breast cancer about 10 years earlier than western women. In this age group, 30-40 years of age, most women’s breasts are denser than that of older women. That is, the younger women have a higher proportion of glandular tissue than fat tissue. This is another point of distinction between western and Asian women, where breast composition is concerned.

Hence it is more important in Asian women, that breast cancer is diagnosed at an early stage, usually through an x-ray examination known as mammography. But conventional mammography, which produces 2D images of the organ, is not good enough when the breasts of most women are too dense. There is a lot of additional tissue that gets in the way of a clear image, and at least 15-20 percent cases of cancer may be missed. As a result, a lot of women have to be recalled for a repeat mammogram, and a sizeable number simply do not turn up!

As surgeons and radiologists began searching for a solution, a number of options emerged. One was to combine ultrasound examination or MRI with conventional mammography. While MRI is mostly considered too expensive, ultrasound offered the advantage of avoiding the use of radiation.

What is Digital Breast Tomosynthesis?

A Digital Breast Tomosynthesis, also known as 3D Mammography, is an advanced form of mammography, used in breast cancer diagnosis. This radiological examination technique uses low dose X-rays and captures a series of images, to detect cancer in its treatable stage.

2D screening is the most commonly used diagnostic technique, but there are limitations to it. The mammograms on examination represent the fibroglandular cells and the cancerous tissues both, in the colour white. The numerous images captured with DBT are used to build a three-dimensional image of the breast, ruling out any possibility of overlap or missing cancerous cells because of the breast density or imaging colour or angles.

A digital breast tomosynthesis DBT simply, combines the 2D images into a 3D image using specific computer systems and software. This allows the entire breast to be screened in thin sections (tomosynthesis) similar to what you may have seen in your CT scan images. The development & testing of DBT started in late 1990s and the first digital images of the female breast were obtained in 1997 by Niklason and his colleagues. DBT was approved for clinical use in 2011. Since then, DBT has proved to be more efficient in detecting cancers.

The technique became more sophisticated over the next few years. By 2005, various studies began to show that Digital Mammography detected 78 percent of cancer cases compared to 51 percent with conventional 2D techniques.

The main advantage of Digital 3D Mammography is that there are that can film the breast under examination from different angles. Hence the imaging is wider, the exposure time is less and the radiation delivered to the body is reduced (conventional mammographic dose is 150-200 milirads). The final results are even better if two sets of images of the breast are obtained: one, sideways and the other top-down. On the other hand, the 2D system has a fixed source of x-rays which limits the range of images that can be produced. Small sized lesions are detected more often and distortions in internal breast structure can be assessed better with 3D imaging techniques.

DBT, however, is not without its disadvantages. One is the initial cost of equipment, which is higher than the cost of conventional 2D mammography equipment. Another is the large number of images it produces (50-100 for each breast) compared with 2-6 with 2D mammography technique. The radiologist concerned therefore has to devote 35-65 percent more time in reviewing the additional films. Experts however say the extra time is compensated by the less frequent need to call the patient back for a repeat examination. A repeat mammography is often suggested when the breast image is unclear or difficult to evaluate with confidence.