How to Give Brain Cancer a Tough Fight 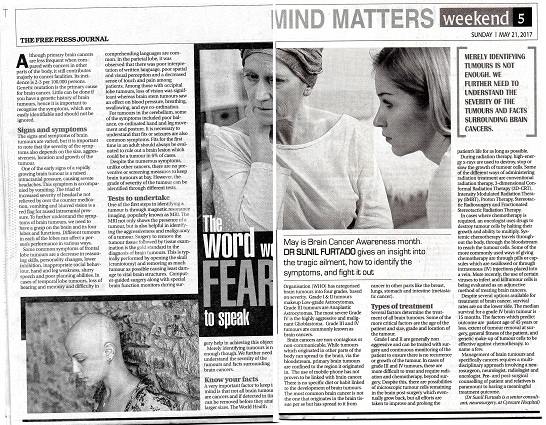 May is Brain Cancer Awareness Month. Dr Sunil Furtado gives an insight into the tragic ailment, how to identify the symptoms and fight it out.

Although primary brain cancers are less frequent when compared with cancers in other parts of the body, it still contributes majorly to cancer fatalities. Its incidence is 2-3 per 100,000 persons. Genetic mutation is the primary cause of brain cancer. Little can be done if you have a genetic history of brain tumours, hence it is important to recognise the symptoms, which are easily identifiable and should not be ignored.

The signs and symptoms of brain tumors are varied, but it is important to note that the severity of the symptoms also depends on the size, aggressiveness, location and growth of the tumour. One of the early signs of a rapidly growing brain tumour is a raised intracranial pressure, causing severe headaches. This symptom is accompanied by vomiting. The triad of increased severity of headache not relieved by over the counter medication, vomiting and blurred vision is a red flag for raised intracranial pressure.  To further understand the brain tumors symptoms, we need to have a grasp on the brain and its four lobes and functions. Different tumours in each of the lobes can affect a person’s performance in various ways.

Some common symptoms of frontal lobe tumours are:

In cases of temporal lobe tumours, Loss of hearing and memory and difficulty in comprehending languages are common.

In the parietal lobe, it was observed that there was poor interpretation of written language, poor spatial and visual perception and a decreased sense of touch and pain among patients. Among those with occipital lobe tumours, loss of vision was significant whereas brain stem tumours saw an effect on blood pressure, breathing, swallowing, and eye co-ordination.

For tumours in the cerebellum, some of the symptoms included poor balance, co-ordinated hand and leg movement and posture. It is necessary to understand that fits or seizures are also common symptoms. Fits for the first time in an adult should always be evaluated to rule out a brain lesion which could be a tumour in 6% of cases. Despite the numerous symptoms, unlike other cancers, there are no preventive or screening measures to keep brain tumours at bay. However, the grade of severity of the tumour can be identified through different tests.

One of the first steps in identifying a tumour is through magnetic resonance imaging, popularly known as MRI. The MRI not only shows the presence of a tumour, but is also helpful in identifying the aggressiveness and malignancy of a tumour. Surgery to remove the tumour tissue followed by tissue examination is the gold standard in the diagnosis of brain tumours.

This is typically performed by opening the skull (craniotomy) and removing as much tumour as possible causing least damage to vital brain structures.  Computer-guided surgery along with special brain function monitors during surgery help in achieving this objective.

Merely identifying tumours is not enough though. We further need to understand the severity of the tumours and facts surrounding brain cancers.

A very important factor to keep in mind is that not all brain tumours are cancers and if detected in time, can be removed before they attain larger sizes. The World Health Organisation (WHO) has categorised brain tumours into four grades, based on severity.

Brain cancers are non-contagious or non-communicable. While tumours which originated in other parts of the body can spread to the brain, via the bloodstream, primary brain tumours are confined to the region it originated in. The use of mobile phone has not proven to be linked with brain cancer.  There is no specific diet or habit linked to the development of brain tumours. The most common brain cancer is not the one that originates in the brain tissue per se but has spread to it from cancer in other parts like the breast, lungs, stomach and intestine (metastatic cancer).

Several factors determine the treatment of all brain tumours. Some of the more critical factors are the age of the patient and size, grade and location of the tumour.

Despite several options available for brain cancer treatment, survival rates are on the lower side. The median survival for a grade IV brain tumour is 15 months. The factors which predict outcome are patient age of 45 years or less, the extent of tumour removal at surgery, general fitness of the patient, and genetic make-up of tumour cells to be effective against chemotherapy, to name a few.

Management of brain tumours and specifically cancers requires a multi-disciplinary approach involving a neurosurgeon, neurologist, radiologist and oncologist. Pre and post-surgical counselling of patient and relatives are paramount to having a meaningful treatment outcome.