More women in Bengaluru have cancer than men, says study 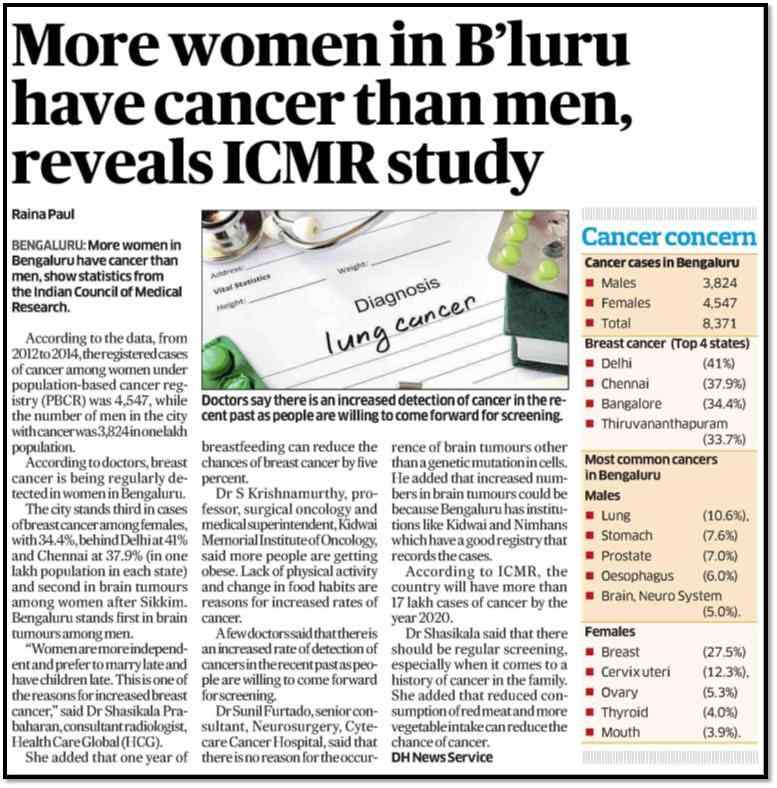 More women in Bengaluru have cancer than men, according to statistics from the Indian Council of Medical Research.

According to the data, from 2012 to 2014, the registered cases of cancer among women under population-based cancer registry (PBCR) was 4,547, while the number of men in the city with cancer was 3,824 in one lakh population.

According to doctors, breast cancer is being regularly detected in women in Bengaluru.

The city stands third in cases of breast cancer among females, with 34.4%, behind Delhi at 41% and Chennai at 37.9% (in one lakh population in each state) and second in brain tumours among women after Sikkim. Bengaluru stands first in brain tumors among men.

“Women are more independent and prefer to marry late and have children late. This is one of the reasons for increased breast cancer,” said Dr Shasikala Prabaharan, consultant radiologist, Health Care Global (HCG).

She added that one year of breastfeeding can reduce the chances of breast cancer by five percent.

A few doctors said that there is an increased rate of detection of cancers in the recent past as people are willing to come forward for screening.

Dr Sunil Furtado, senior consultant, Neurosurgery, Cytecare Cancer Hospital said that there is no reason for the occurrence of brain tumours other than a genetic mutation in cells. He added that increased numbers in brain tumours could be because Bengaluru has institutions like Kidwai and Nimhans which have a good registry that records the cases.

According to ICMR, the country will have more than 17 lakh cases of cancer by the year 2020.

Dr Shasikala said that there should be regular screening, especially when it comes to a history of cancer in the family. She added that reduced consumption of red meat and more vegetable intake can reduce the chance of cancer.