Neuro-Oncology: An Advancing Sub-Speciality In Neurosciences 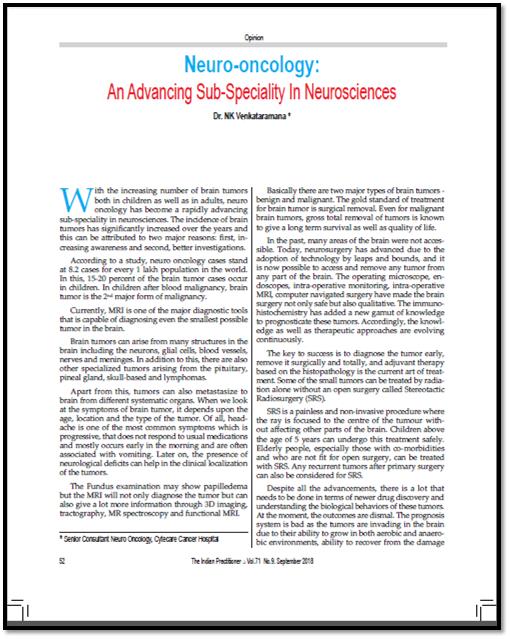 With the increasing number of brain tumors both in children as well as in adults, neuro oncology has become a rapidly advancing sub-speciality in neurosciences. The incidence of brain tumors has significantly increased over the years and this can be attributed to two major reasons: first, increasing awareness and second, better investigations.

According to a study, neuro oncology cases stand at 8.2 cases for every 1 lakh population in the world. In this, 15-20 percent of the brain tumor cases occur in children. In children after blood malignancy, a brain tumor is the 2nd major form of malignancy. Currently, MRI is one of the major diagnostic tools that is capable of diagnosing even the smallest possible tumor in the brain. Brain tumors can arise from many structures in the brain including the neurons, glial cells, blood vessels, nerves, and meninges. In addition to this, there are also other specialized tumors arising from the pituitary, pineal gland, skull-based and lymphomas.

Apart from this, tumors can also metastasize to the brain from different systematic organs. When we look at the brain cancer symptoms, it depends upon the age, location and type of the tumor. Of all, head-ache is one of the most common symptoms which is progressive, that does not respond to usual medications and mostly occurs early in the morning and are often associated with vomiting. Later on, the presence of neurological deficits can help in the clinical localization of the tumors. The Fundus examination may show papilledema but the MRI will not only diagnose the tumor but can also give a lot more information through 3D imaging, tractography, MR spectroscopy, and functional MRI.

Basically there are two major types of brain tumors – benign and malignant. The gold standard of brain cancer treatment is surgical removal. Even for malignant brain tumors, gross total removal of tumors is known to give a long term survival as well as the quality of life.

In the past, many areas of the brain were not accessible. Today, neurosurgery has advanced due to the adoption of technology by leaps and bounds, and it is now possible to access and remove any tumor from any part of the brain. The operating microscope, endoscopes, intra-operative monitoring, intra-operative MRI, computer navigated surgery have made brain surgery not only safe but also qualitative. The immuno-histochemistry has added a new gamut of knowledge to prognosticate these tumors. Accordingly, the knowledge, as well as therapeutic approaches, are evolving continuously.

The key to success is to diagnose the tumor early, remove it surgically and totally, and adjuvant therapy based on the histopathology is the current art of treatment. Some of the small tumors can be treated by radiation alone without an open surgery called Stereotactic Radiosurgery (SRS). SRS is a painless and non-invasive procedure where the ray is focused to the centre of the tumour without affecting other parts of the brain. Children above the age of 5 years can undergo this treatment safely. Elderly people, especially those with co-morbidities and who are not fit for open surgery, can be treated with SRS. Any recurrent tumors after primary surgery can also be considered for SRS. Despite all the advancements, there is a lot that needs to be done in terms of newer drug discovery and understanding the biological behaviors of these tumors. At the moment, the outcomes are dismal. The prognosis system is bad as the tumors are invading in the brain due to their ability to grow in both aerobic and anaerobic environments, the ability to recover from the damage caused by radiotherapy, association with a variety of genetic abnormalities and ineffective chemotherapy due to the blood brain barrier.

The molecular biology has shown many gene defects as well as enigmatic disturbances that determine the aggressiveness as well as the response to therapy. Analyzing these factors in greater detail might throw light in the future for better prognostication as well as new drug discovery that can control these tumors. At the moment, surgical gadgets are getting geared up for the gross total removal. Navigation assisted surgery, tumor fluorescence, intra-operative fluorescence, locally targeted radiation and MR assisted radiofrequency ablation are in the vogue today.

Gene therapy and immunotherapy are being at-tempted. Tumor stem-cells are gaining popularity at a faster pace. Identification of the specific stem-cells for the tumors might help us ineffective targeted therapies as well as eradication of the disease. In addition, immune targeted activated lymphocyte therapy and autologous Natural Killer Cells are being tried in with reasonable benefits. Mesenchymal stem cells are also being tried for the immune-modulation and are coupled with nanotechnology as one of the targeted therapies. Since the brain tumors are multi-factorial, they continue to pose phenomenal challenges. The future is more directed towards effective non-invasive or minimally-invasive therapy that can offer a reasonable cure.