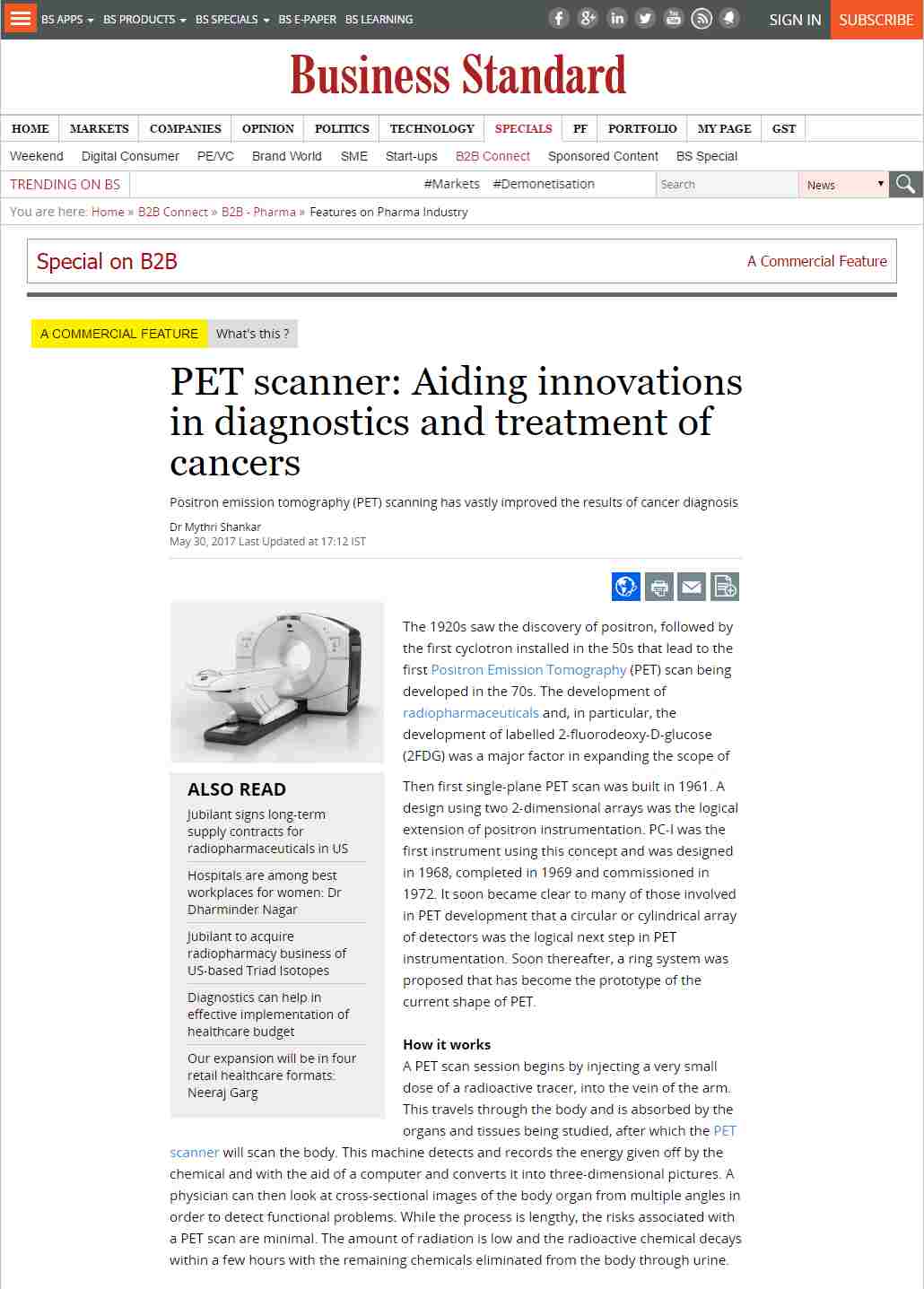 The 1920s saw the discovery of positron, followed by the first cyclotron installed in the 50s that lead to the first Positron Emission Tomography (PET) scan being developed in the 70s. The development of radiopharmaceuticals and, in particular, the development of labeled 2-fluorodeoxy-D-glucose (2FDG) was a major factor in expanding the scope of PET imaging and first administered to two normal human volunteers in August 1976.
Then first single-plane PET scan was built in 1961. A design using two 2-dimensional arrays was the logical extension of positron instrumentation. PC-I was the first instrument using this concept and was designed in 1968, completed in 1969 and commissioned in 1972. It soon became clear to many of those involved in PET development that a circular or cylindrical array of detectors was the logical next step in PET instrumentation. Soon thereafter, a ring system was proposed that has become the prototype of the current shape of PET.

A PET scan session begins by injecting a very small dose of a radioactive tracer, into the vein of the arm. This travels through the body and is absorbed by the organs and tissues being studied, after which the PET scanner will scan the body. This machine detects and records the energy given off by the chemical and with the aid of a computer and converts it into three-dimensional pictures. A physician can then look at cross-sectional images of the body organ from multiple angles in order to detect functional problems. While the process is lengthy, the risks associated with a PET scan are minimal. The amount of radiation is low and the radioactive chemical decays within a few hours with the remaining chemicals eliminated from the body through urine.

Today, from being able to outline bone structures to imaging biological processes; from using X-rays for imaging to using radioactive tracers to detect cellular activity, the medical imaging sector has come a long way from the traditional Computed Tomography (CT) scan. While a CT scan shows gross changes, the PET/CT scan will refine them. Despite the burden of being variably expensive and time consuming, the results procured from the PET scan are more viable and trustworthy and hence recommended by more and more oncologists for diagnostic accuracy.

PET scanning is used effectively in oncology, neurology, cardiology, cognitive neuroscience, psychiatry, pharmacology and Muscular-Skeletal Imaging. It is especially utilised in the oncology space – To detect cancer, the type of cancer, how far it has spread, at what grade it has settled into, what treatment would be best suited, etc.Similar to a blueprint, it allows doctors to understand sensitive activity at the cellular level. The metabolic activity, the functional level and the glucose uptake on the PET scan is impressive. Cancer treatment often contains one or more of three possible treatments – surgery, chemotherapy and radiation therapy. With the introduction of PET scans in cancer diagnosis, the results have proved far superior as compared to other diagnostic methods, so much so that it has changed management decision in 30 to 40 percent of the cases.

Besides this, PET scans are also used to evaluate heart disease and neurological conditions. It has become the technique of choice to investigate – at a cellular level various neurological diseases and disorders, including that of a stroke, epilepsy, Alzheimer’s disease, Parkinson’s disease, and Huntington’s disease. Various psychiatric disorders, such as schizophrenia, depression, obsessive-compulsive disorder, attention-deficit/hyperactivity disorder, and Tourette syndrome, are also imaged by the PET scanner.

Bringing PET scans to the patients

Twenty years ago, there were only seven centres in the US that had PET scan facilities. When the technology came to India, it was concentrated to only Hyderabad and Delhi, followed by Bangalore. From centre in 2005, there are now 10 in Bangalore and over 100 PET enabled scan centres and over 250 nuclear medicine setups across India. Although the number is less compared to ECG and radiology centres, the technology is picking up, despite hurdles. Some of the biggest obstacles in bringing PET to more centres is the extremely high-end training required to operate the scanner, regulations and expensive infrastructure.

To install a PET scanner in a hospital, the estimated expenses are Rs 20 crores which not many hospitals can afford. This has limited the growth of technology. As the PET scanner requires the use of radioactive materials, its use becomes a matter of national security as it has scope for misuse. Hence licensing is a challenge to overcome.

Despite the challenges, PET scanners have made their way to the Indian medical industry, proven their mettle and opened up the market to path-breaking innovations in diagnostics and treatment of cancers.