The Big Fight: After Being Diagnosed with Cancer, Kickboxer Girish Promises to return to the Ring 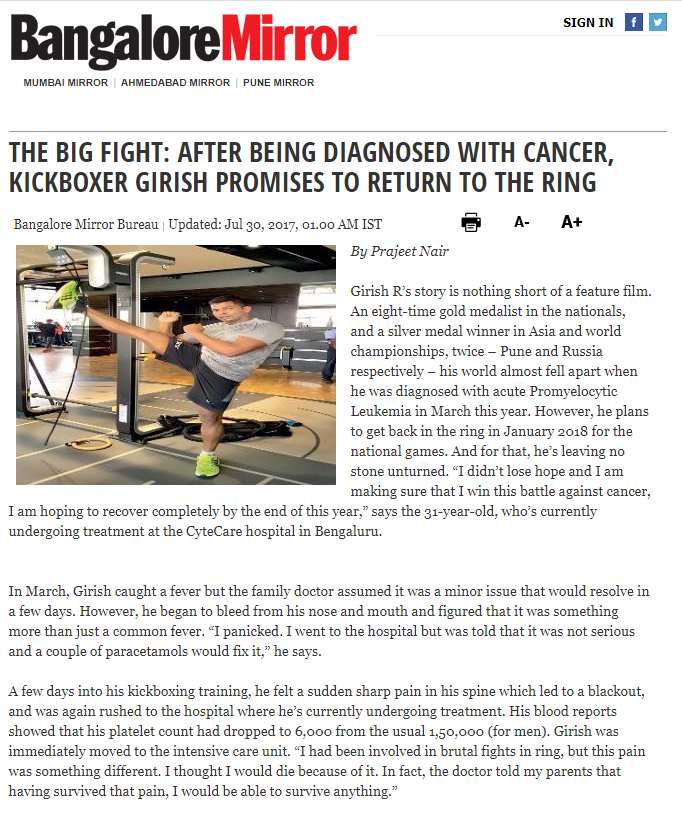 Girish R’s story is nothing short of a feature film. An eight-time gold medalist in the nationals, and a silver medal winner in Asia and world championships, twice – Pune and Russia respectively – his world almost fell apart when he was diagnosed with acute Promyelocytic Leukemia in March this year. However, he plans to get back in the ring in January 2018 for the national games. And for that, he’s leaving no stone unturned. “I didn’t lose hope and I am making sure that I win this battle against cancer, I am hoping to recover completely by the end of this year,” says the 31-year-old, who is currently undergoing treatment at the CyteCare hospital in Bengaluru.

In March, Girish caught a fever but the family doctor assumed it was a minor issue that would resolve in a few days. However, he began to bleed from his nose and mouth and figured that it was something more than just a common fever. “I panicked. I went to the hospital but was told that it was not serious and a couple of paracetamols would fix it,” he says.

A few days into his kickboxing training, he felt a sudden sharp pain in his spine which led to a blackout and was again rushed to the hospital where he’s currently undergoing treatment. His blood reports showed that his platelet count had dropped to 6,000 from the usual 1,50,000 (for men). Girish was immediately moved to the intensive care unit. “I had been involved in brutal fights in the ring, but this pain was something different. I thought I would die because of it. In fact, the doctor told my parents that having survived that pain, I would be able to survive anything.”

Despite trying to maintain a cheerful front, Girish is often succumbing to depression and disappointment. For a man who used to earn about `50,000 a month, he manages to make about `20,000 right now, which barely takes care of his medical needs. But he’s still not giving up and hits the gym between 6 am and 12 pm every day, after which he heads to the hospital for his treatment. And Bhagyamma, his 60-year-old mother, has taken on the responsibility of nursing Girish, the youngest of five siblings, back to good health.

Currently, in need of `10 lakh, Girish is far from giving up this battle. His older sister, Tejaswini R, who works as a finance manager, says, “We’ve got some help from friends and other sponsors. But right now we are hoping the government will help us in some way. Fortunately, the hospital hasn’t put any pressure on us.”

To make a living, Girish works as a fitness trainer and has trained Kannada actors like Ambarish’s son Abhishek, Prajjwal Devaraj, and Meghna Raj. But his foray into kickboxing wasn’t a childhood aspiration. When he was 18, he used to work as a delivery boy and had once stepped on a prominent politician’s banner by mistake. He was rewarded with a slap from the politician. “I went back home and I cried. I wanted to take revenge on the politician, which is why I started to learn kickboxing. My mother didn’t approve of the violent sport so I didn’t sign up without telling her. I would hide my kickboxing uniform at a neighborhood baker where I would change my clothes and go for practice.”

It was only after a year that he told his mother about it, and that too when he qualified for the national tournament in Delhi, where he won the gold medal. His mother did not stop him, and soon Girish started winning laurels and became the face of many tournaments across the country such as the ones by World Association of Kickboxing Organisations, and another state level, national level, and world championship. Victory became his second nature. “However, the one thing that irks me is not winning a gold medal in the world championship,” he rues.

“International players have access to high-end training facilities, and this is apart from all the sponsorship they receive to participate in various international tournaments. Here, we hardly get anything and even have to pay to participate in a tournament. International flights cost up to `3 lakh sometime, which is quite impossible for me to afford. Their level of training is far more advanced than ours, and I have noticed how some of these international players beat me easily. We need better opportunities to improve the game of kickboxing in our country,” says Girish who has also participated in Karate, Muay Thai and other fighting competitions.

But at the moment, Girish is fighting a far more serious battle and has pretty much surprised everyone around him, including his doctor Hari Menon, a senior consultant in hematoma oncology at the hospital. “Girish was diagnosed with a grave medical illness that was potentially life-threatening. He had to go overcome unique challenges initially due to the disease itself and subsequently due to some unusual side effects related to the treatment. However, he has remained stoic and brave, taking and overcoming these problems in his stride. He has remained focused on getting better, with his condition responding fully to treatment. He has now moved on to revive his sporting career which had to take a back seat a few months ago. Now he’s back to regular training while he continues to be on treatment which is drawing to a conclusion in the next few months. While medical science has answers to specific problems in cancer leading to cure it is also important for afflicted patients to remain positive and to persevere to get back to the mainstream and continue to pursue your dreams. I would say Girish is a perfect example of what we would like to see in a cancer patient and that means being positive, pursuing your dreams, and achieving those despite hurdles such as an illness that crop up in life.”