Where is the Tumour - Pancreatic Cancer 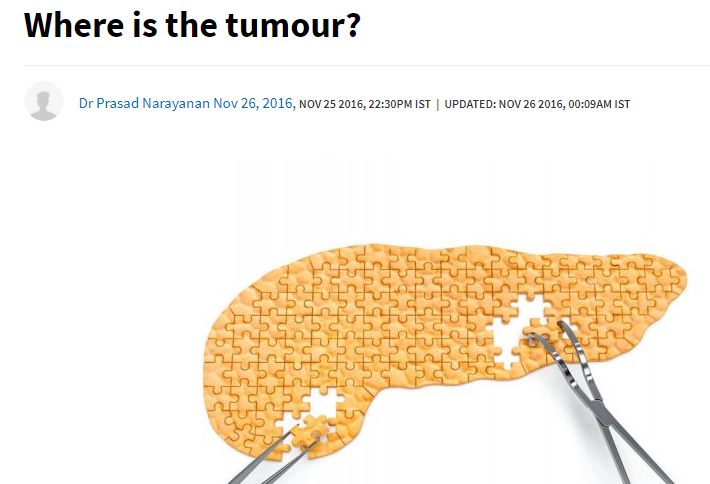 Pancreas is a vital part of our digestive system and performs two functions. It secretes enzymes that aid digestion (exocrine function) and regulates blood glucose level by secreting the hormones insulin and glucagon (endocrine function).

The organ is anatomically broken down into the head, body and tail. The widest part of the pancreas, the head, is located near the stomach and the duodenum, towards the centre of your abdomen. The tail of the pancreas is thinner and is to the left of the abdomen. Due to its deep position, most pancreatic tumours are hard to locate. It is one of the reasons why the cancer isn’t detected until it advances and starts producing symptoms.

Pancreatic cancer occurs when malignant cells begin to grow uncontrollably in the any part of the organ. It is an aggressive form of cancer with poor prognosis. In India, even though it has a relatively lower incidence (0.5 – 2.4 per 1 lakh men and 0.2-1.8 per 1 lakh women), the growing population and the increase in contributing risk factors such as smoking, diabetes, obesity, alcoholism etc. are cause for concern. The five year survival rate of pancreatic cancer is only about 4%. It is imperative that new research and epidemiological data be used to strategise prevention and improve management of the ailment.

Where the tumour lies approximately 65% of all pancreatic cancer occurs in the head, while about 15% are found in the body and tail, and the rest are diffused in the gland. In an effort to assemble the pieces of puzzle, researchers are examining the relationship between the location of the tumour and other factors such as survival, incidence, resistance to chemotherapy, treatment modality etc.

The symptoms of pancreatic cancer have a correlation to the location of the tumour. Tumours in the head start showing symptoms earlier than those in the body or tail. As they are close to vital organs like the bile duct, duodenum and stomach, the growth of these tumours may interfere with the function of these organs. Some of the common symptoms of pancreatic head tumours include jaundice, weight loss, nausea, fatigue, itching and skin rashes, loss of appetite, etc. Tumours appearing in the tail of the pancreas may grow for a while before presenting symptoms. One of the most common symptoms of tail tumour is a back pain that is aggravated upon lying down, while jaundice is rather uncommon.

The standard treatment options include a combination of surgery, radiation therapy, chemotherapy and/or targeted therapy. The location of the tumour on the pancreas is a key determinant in deciding the type of surgical intervention.

A pancreatoduodenectomy is often the choice of surgery for pancreatic head tumours. This is a major surgical procedure that involves the removal of pancreas, duodenum, a portion of the intestine, gall bladder, and sometimes the distal stomach, most commonly called Whipple’s procedure.

When the pancreatic tumour is located in the tail, often a distal orcaudal pancreatectomy is considered. This often includes removal of the spleen along with the tumour. Post surgery, depending on the stage of the disease, the patient might be treated with chemotherapy and/or radiotherapy.

What research shows population-based study on pancreatic adenocarcinoma patients suggests that pancreatic cancers found in the body and tail of the organ, unlike those found in the head, have a lower rate of resectability and poorer overall survival. Similarly, analysis using data from epidemiological and surveillance registries reveals that the incidence of pancreatic head cancer has remained stable, while that of the body and tail continues to rise.

In vitro studies on pancreatic ductal carcinoma have recognised genetic and molecular diversity (such as mutations) depending on the anatomical location of the tumour on the pancreas. This is likely to affect the chemo-sensitivity, invasiveness etc. and further research in this area may be pivotal in recommending targeted therapies.
In order to completely establish the relationship between the location of the tumour and the severity of the cancer, large, multi-centre studies are needed to examine the demography, disease characteristics, patient survival, molecular markers etc. Additional insights are definitely a key in therapeutic decision making to battle this aggressive form of cancer and provide hope of better survival and outcome to patients. (The author is a medical oncologist at Cytecare Medical Hospitals, Bengaluru)