Yes, non-smokers can get lung cancer too 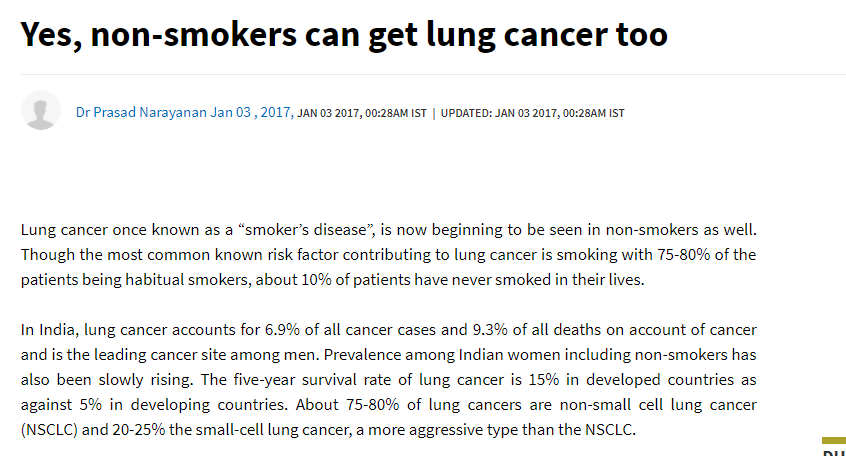 Lung cancer once known as a “smoker’s disease”, is now beginning to be seen in non-smokers as well. Though the most common known risk factor contributing to lung cancer is smoking with 75-80% of the patients being habitual smokers, about 10% of patients have never smoked in their lives.

In India, lung cancer accounts for 6.9% of all cancer cases and 9.3% of all deaths on account of cancer and is the leading cancer site among men. Prevalence among Indian women including non-smokers has also been slowly rising. The five-year survival rate of lung cancer is 15% in developed countries as against 5% in developing countries. About 75-80% of lung cancers are non-small cell lung cancer (NSCLC) and 20-25% the small-cell lung cancer, a more aggressive type than the NSCLC.

There are several risk factors that contribute to lung cancer in non-smokers. They include:

Passive smoking or inhaling tobacco smoke from other smokers, when they share the same space such as home, waiting areas like railways stations or bus stands, offices cinema theatres, amusement parks etc.

As many as 7,000 chemicals are believed to be present in second hand smoke, of which at least 250 are known to be harmful. That is why many of these public places have been turned into no-smoking zones in recent years. Air pollution: one of the culprits, specialists say, is the earthen chulha that millions of rural women use for cooking their meals. This is because coal smoke contains a number of carcinogenic (cancer causing) substances such as sulphur dioxide, carbon monoxide, radon gas, thoron, etc. Interestingly, carbon monoxide is a major constituent of vehicle exhaust and sulphur dioxide is significantly present in the gaseous effluents of many chemical industries.

Exposure to asbestos dust, arsenic and nickel over long periods, as it happens in refinery workers and smelters, is an important reason for non-smokers to be afflicted with lung cancer. In the case of arsenic toxicity, lung cancer mostly involves the upper lobe but may have origins at multiple points within the same lung.

Some genetic mutations have been linked with lung cancer. These may be inherited from parents or acquired during an individual’s lifetime. It is now widely believed that genes do not remain constant throughout life. They undergo changes on account of lifestyle factors such as diet and exercise, exposure to polluted air, etc, and some of these changes may ultimately result in cancer.

A few other diseases of the lung, such as TB, asthma, emphysema and COPD (chronic obstructive pulmonary disease) appear to increase the risk of an individual person getting lung cancer. Same is the case with HIV infection, human papilloma virus infection, some types of pneumonia, etc, apart from hormone replacement therapy (used for treatment of menopausal symptoms in middle-aged women.

In a social set-up, non-smokers may face stigma such as being tagged as “closet smokers”. Also, caregivers and/or young non-smokers are often confused, how someone who has never smoked or exposed to something very toxic for long-term has developed lung cancer.

It is important to understand and create awareness that non-smokers can be prone to developing lung cancer, triggered by various non-smoking reasons to genetic mutations. They need equal care and support when diagnosed.