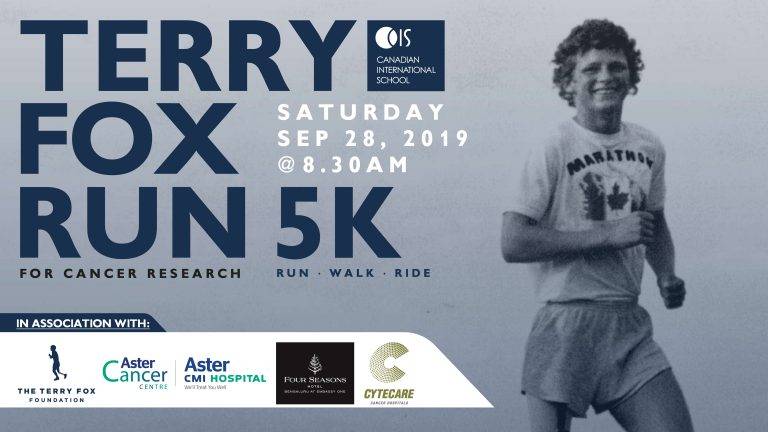 Cytecare, in association with the Canadian International School, is proud to host this year’s Terry Fox Run, a public awareness marathon targeted towards raising cancer awareness and eradicating it, on the 28th of September, 2019.

We are expecting each and every one of you to come forward and not only be a part of this event but also influence it in every way possible. We are dedicated to eradicating this disease from the heart of humanity, and we promise to do everything in our power to make that a reality; however, we cannot do this alone. We need each and every one of you to walk (in this case, jog) by our side while we make a march towards victory. Only in solidarity shall we find strength!

Who was Terry Fox?

The Terry Fox Run is an annual non-competitive charity event held worldwide in memory of Terry Fox, a Canadian humanitarian, athlete and cancer research activist. He was born in 1958 to a family of dedicated parents who nurtured and protected him greatly and supported his athletic nature.

During school, he excelled at sports like basketball and soccer and even managed to secure a spot in his school team despite being 5 feet tall. However, soon after joining the college in 1976, he was diagnosed with bone cancer (osteosarcoma) that left him with one working leg and a string of broken dreams. He learned during this time that advances in technology increased his chances of survival to around 50% from 15% in just two years which reinstill his hope in cancer research. He then started training with his artificial leg and promised to be back on the field within a year.

Terry started training with his dad but kept his future plans a secret. Inspired by Dick Traum (the first amputee to complete the New York Marathon), Terry started taking steps to make his dreams come to life. He confided in his long-time friend, Douglas Alward, his plans to run the entire length of Canada in order to raise funds and awareness towards cancer diagnosis and research.

While the initial plan was to raise a mere million, he soon increased it to 24 million dollars, one each of every resident of Canada. With the backing of the Canadian Cancer Society, his parents and several of his doctors and well-wishers, Fox started his run on the 12th of April, 1980 with the motive to mix a bottle of water from the Atlantic with one from the Pacific.

Despite several challenges, false allegations and low reception from the public, he pressed on and soon the media picked up on his spectacle. As his popularity in the media grew, so did the events, receptions and the overall funding for his goal.

In late-August, about 4 months after the start of his journey and with about $1.7 million raised in total, he found himself getting extremely exhausted and unable to continue. He was soon admitted to a hospital where he found out that cancer had returned and had spread to his lungs. He was forced to abandon the marathon but his popularity among the residents of Canada was off the charts. Hundreds gathered around to pay tribute and donate towards his cause, which closed in around $23 million. Terry passed away on the morning of 28th June 1981 to the mourning of an entire planet.

Terry is still remembered as the man who conquered cancer and paved the way for modern research facilities as we know it today.

Terry was instrumental in making cancer research one of the top priorities of the world. Isadora Sharp, the founder of Four Seasons and a grieving father who lost a child to cancer in 1979, wrote to Terry expressing his wishes to make the Terry Fox Marathon an annual event. From then on, people all over the world have been organizing such marathons in order to raise awareness for cancer and support people suffering from it. Usually held on the second Sunday following Labour Day, the Terry Fox Run is completely non-competitive and participation via any means possible is greatly appreciated.

Cytecare, as you all know, is greatly vested in the cause and has continuously tried to support such awareness programs through direct and indirect involvement. While cancer research budgets are rising in India, we still feel that a lot can be done to get more people involved directly thus increasing its effectiveness greatly. Therefore, we are associating with the Canadian International School this year to organize the Terry Fox Marathon right here in Bangalore and get as many people involved as possible.

We cordially invite each one of you to attend the event and help us in spreading cancer awareness among the masses. As stated earlier, the marathon is not competitive, meaning that participation holds the highest honour and you are free to walk, run or bike during the event. The Terry Fox run distance will be 5 km. There are no entry costs, however, a donation in any form and kind will be greatly appreciated!

The details for the event are listed below:

We urge each and every one of you to inform your neighbors, parents, and friends, and show up in numbers to make this event a huge success. Let’s all contribute and help each other out to make this disease a thing of the past. Let’s make a bold run towards a cancer-free future!