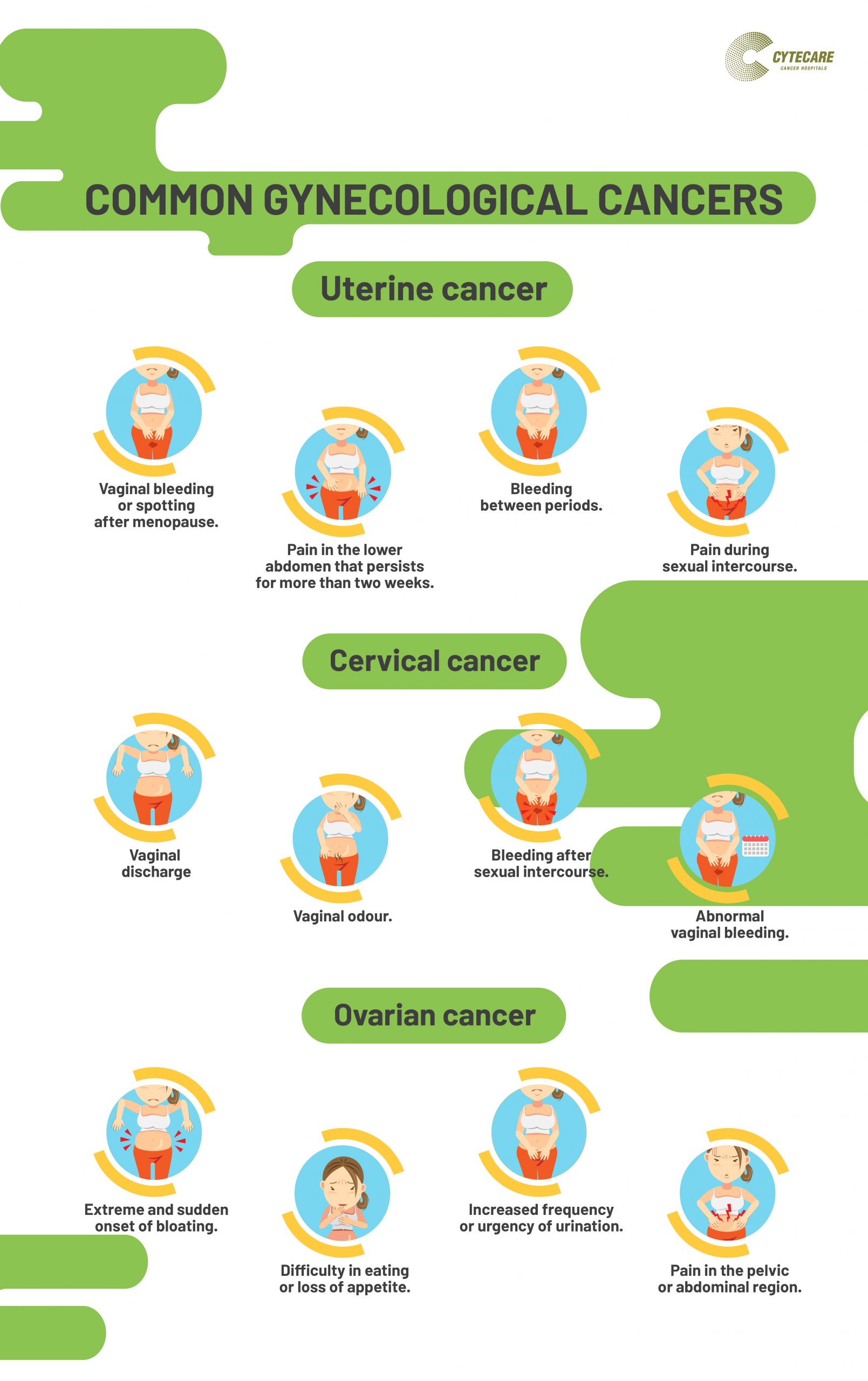 Cancer occurs when the cells divide uncontrollably and destroy the body tissue. When cancer originates in reproductive organs, it is termed as gynecological cancer. Gynecologic oncology is the field of study and practice that deals with the tumors of the female genital tract.

The term ‘Gynaecological Cancers’ comes with the medical condition in which cancer or tumor cells develop in the reproductive organs of a woman’s body; these include cervical cancer, ovarian cancer, uterine cancer, vaginal cancer, and vulvar cancer.

There are six types of gynecological cancers of which three are common and the other three are rare which are listed below.

The following types of gynecological cancers are quite common and affect a large number of women every year:

Uterine cancer is cancer that begins in the uterus and is one of the most common types of gynecological cancers. Though it can happen to anyone, some factors which increase the risk of uterine cancer are obesity, diabetes, hypertension, use of estrogen without progesterone, etc.

The common endometrial cancer symptoms are:

Endometrial cancer is diagnosed quite early in most cases and hence is treated by a laparoscopic (minimally invasive) surgery. The entire treatment requires only 2-3 days of hospital stay in most cases. Though a few patients of endometrial cancer (about 10-15%) may require further treatment in the form of radiotherapy or a combination of radiotherapy and chemotherapy.

Another very common type of gynecologic cancer is cervical cancer and is one of the leading causes of cancer-related deaths in women worldwide. A large number of women in India are diagnosed with this cancer every year, and unfortunately, due to lack of awareness and poor cancer screening facilities, a majority of women are diagnosed when cancer has reached advanced stages. Also, a large number of cervical cancers are caused due to HPV (Human Papillomavirus) infection.

Some common cervical cancer symptoms include:

Regular cancer screenings and PAP test for HPV detection are important for early detection. If diagnosed early, cervical cancer can be treated by radical surgery alone while those detected in advanced stages require a combination of chemo and radiation therapy.

Vaccinating young girls for preventing HPV infection before they are sexually active is a very effective way to prevent cervical cancers as well as many other forms of gynecological cancers.

Some common ovarian cancer symptoms are:

Germ cell tumour, another type of ovarian cancer, is usually seen in younger individuals and about 95% of these are curable by surgery alone while other cases may require additional chemotherapy. To treat germ cell tumour in young patients, fertility preservation therapy (sparing the other ovary and uterus) is usually preferred for treatment.

The third type of ovarian cancer i.e. the stromal cell cancer is usually slow-growing in nature. A majority of such cases are treatable by surgery alone.

Some rarer forms of gynecological cancers are:

Vulvar cancer is a rare form of gynecological cancer and it affects the external female genitalia. It usually occurs in elderly women and is easily identifiable by the following symptoms:

Vulvar cancer is a highly curable type of gynecological cancer. In most cases, radical surgery is sufficient to treat vulvar cancer but some cases may require chemotherapy and radiation therapy as well.

Vaginal cancer is one of the rarest forms of gynecological cancer. It usually affects women over 50 years of age and in most cases, HPV (Human Papillomavirus) infection is responsible for cancer. The symptoms are:

Similar to vulvar cancer, many cases of vaginal cancers are treatable with radical surgery while others may require radiotherapy and chemotherapy.

Gestational trophoblastic disease (GTD) is a term used for a group of pregnancy-related tumours. These type of tumours are also quite rare and are further subdivided into five types (one benign and four malignant). These tumours usually start in the cells that would become placenta during pregnancy. The tumour starts in layers of cells known as trophoblast which surround the embryo and is mostly benign. These tumours are highly curable and are mostly treated with chemotherapy.

When it comes to the diagnosis and gynecological cancers treatment, Cytecare provides you with unparalleled services. At Cytecare, we have a dedicated unit for women’s oncology and our diverse team includes gynecologists, oncologists, radiation oncologists, etc. who have years of experience in treating various gynecological cancers. Our medical expertise is complemented by state-of-the-art infrastructure providing you with the most advanced diagnostic facilities.