Active or passive smoking leads to cancer in voice box 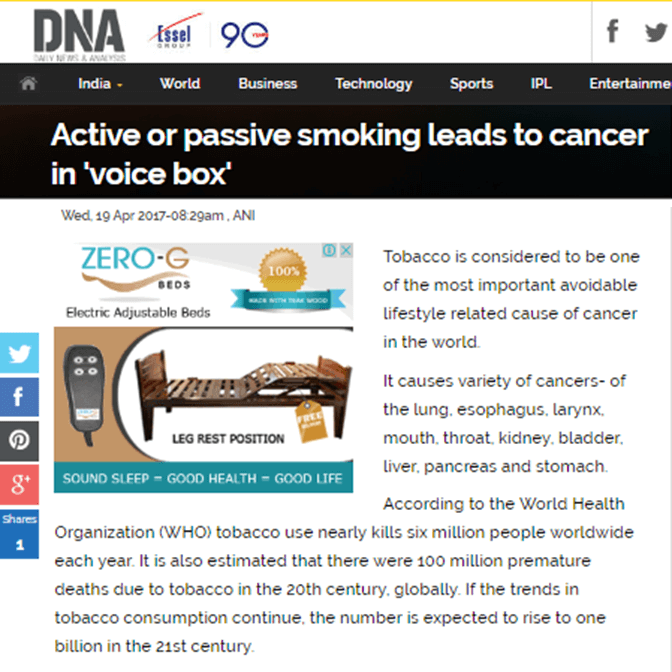 Tobacco is considered to be one of the most important avoidable lifestyle related cause of cancer in the world.

According to the World Health Organization (WHO) tobacco use nearly kills six million people worldwide each year. It is also estimated that there were 100 million premature deaths due to tobacco in the 20th century, globally. If the trends in tobacco consumption continue, the number is expected to rise to one billion in the 21st century.

According to Dr. Vikram Kekatpure, senior consultant – Head and Neck Surgical Oncology, the risk of various cancers of the head and neck is often higher in tobacco smokers and chewers than in no tobacco users. Majority of individuals with these cancers have a history tobacco use. Various form of smokeless tobacco like Gutka, khaini, and smoking cigarettes, pipes, and cigars along with passive smoking all increase the chance of getting these cancers.

Laryngeal Cancer is the cancer, arising in the larynx, or the “voice box”, the area of the throat which includes the vocal cords. It is a type of head and neck cancer and is frequently diagnosed in smokers.

Some other symptoms associated with Laryngeal Cancer include:

The treatment of Laryngeal cancer is according to the stage of disease, he added.

Voice is a critical necessity for human connection and social outlook. If laryngeal cancer is detected in an early stage, the vocal cord and therefore voice function can be preserved. In initial stages the treatment is organ preservation with radiation therapy.

However, in advance stages, the surgery to remove voice box is required. Even after removal of the voice box, rehabilitation with artificial voice is possible.

It is good to be alert regarding various symptoms for Laryngeal Cancer. If there is persistent hoarseness of voice for more than 3 weeks it is advisable to get examined voice box examined (laryngoscopy) by an ear, nose and throat (ENT) specialist.

Right now, it is well-accepted that chances of developing cancer are affected by the lifestyle choices you make. Hence it is advisable to stop smoking to decrease the chances of laryngeal cancer.

(This article has not been edited by DNA’s editorial team and is auto-generated from an agency feed.)